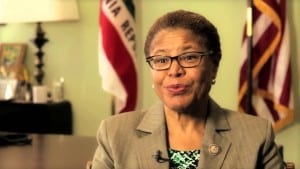 From the office of Congresswoman Karen Bass – “I hope you will join me for a forum on U.S.-Africa Policy in the Era of Obama on Saturday, May 21 at 10:00 AM at Holman United Methodist Church in Los Angeles.

From 2000 to 2010, six of the world’s 10 fastest-growing economies were in sub-Saharan African countries. As a result of economic progress there, Africa’s middle class has tripled in size over the last 30 years, numbering 313 million people, greater than 34 percent of the population of the whole continent.

Over the next 10 years, Africa will become an even more important part of the world economy, with a large, youthful population that is increasingly university-educated, tech-savvy and entrepreneurial. Without question, it is in the interest of the United States to engage with the countries of Africa–the world’s new economic frontier. It is vital that American policymakers work toward a stronger and mutually beneficial economic relationship with the nations of Africa that will stand the test of time.

As the ranking Democrat on the House of Representatives’ Africa Subcommittee, I have the honor of focusing on how the United States can continue to work with the 54 nations and more than 1 billion people who live on the African continent.

I hope you will attend to learn about actions in Congress to ensure that the United States is ready to maximize our partnership with African nations, and so that I can answer questions that you may have.

I look forward to seeing you on May 21 at Holman United Methodist Church.”

For more info go to bass.house.gov