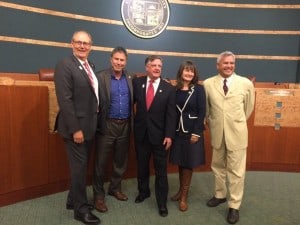 April 25, 2016 found the Mike Balkman Council Chambers filled to overflowing in anticipation of the last meeting of the old council and the swearing in and seating of the new. Andy Weissman and Mehaul O’Leary were both retired from their years of community service, and the winners of this month’s elections were seated, with Jim Clarke chosen as Mayor and Jeff Cooper as Vice Mayor for the coming year.

Artist Laureate Janet Hoult offered a poem in honor of the occasion and in honor of Shakespeare’s birthday, which was met with warm applause by the officials and the spectators.

The action item on the agenda confirming the results of election in accordance with the city charter was brought forth as the first order of business, and it was time for the remaining council members to say their farewells to the departing Andy Weissman and Mehaul O’Leary, both of whom were termed out.

Jim Clarke told O’Leary “I have described you as an Irish mensch, you are responsible for so many kind and generous acts that many are not aware of; thanks on behalf of the community for your years of service. Whenever I attend [the meetings of ] the California league of cities, and I say I’m from Culver City, I am asked about that ‘crazy Irishman’ and congratulated on your work.”

Clarke offered to Weissman “You and I became soul mates before we joined the council, one morning on Clarmon Place, where we both chose to begin our campaigns by canvassing the same street. I’m glad we can get together and talk now without worrying about violating the Brown Act.”

Council member Cooper noted it was a “bittersweet day, to have to say goodbye to these two fine gentlemen who have served our city these last eight years.”

“Andy has been a great mentor for me.” Cooper offered his perspective, saying “It’s easy in personal life to make a decision; in public life, you have to take a step back and know how many people will be affected, how many things will reflect that. If we agree or disagree, it’s like family, we just keep on.”

When it was council member Meghan Sahli-Wells turn to speak, she was effusive in her delight. “What a pleasure and an honor it’s been to serve with both of you. My first encounter with you was as an engaged resident, [in regard to the development on Irving Place] then we campaigned together and we won together. And as strange as these campaigns can get, you also form friendships. You have been sincerely there to serve the community, and I cherish the respect I’ve developed for both of you. You learn about democracy when you are an elected official, and it’s really a beautiful thing.”

In their own closing remarks, both men summarized their history and philosophies of city service.

“Tomorrow will be the first day in 32 years that I have not had a city commission or council meeting on my agenda. While a part of me thinks, enough is enough, I have serious fears about withdrawal.” Weissman offered his thanks to his family for their unflagging support, and asked his wife Doneil and granddaughter Cambria to stand for some appreciative applause.

While his long list of what the most proud moments of his term included the Westfield Mall, the Expo Line and more than a dozen other projects completed, he stated with some gravity that what he was most proud of was “the renewed sense of civility and respect on the council. Respect is essential to all forms of good government. It is having the patience to engage in dialogue with those who disagree, and finding ways to work together. We have become such a polarized system that the impulse to harmonize has almost vanished. I have every confidence that the new council can disagree without rancor or hostility.”

He finished by noting that “Culver City continues to change and evolve. Please get involved – please stay involved.”

O’Leary acknowledging his reputation for long windedness, began by joking that his remarks would be brief “as I did help Andy with [writing] his.”

“Walking through the halls today, I just wanted to greet as many of the rank and file as possible. You as the employees made our lives so much easier by how you did your job. We came through the greatest recession of my lifetime, and we survived it better than most [cities] because you were willing to make the sacrifices, and make it [possible] for us to make those tough decisions.” He continued, addressing the next council to be seated, saying,  “While I joked to my new colleagues – you know nothing – there will be a shocking amount you need to catchup on, so research vociferously. These items that comes before you will a have an historic back ground, and the decisions you make up here reflect on people’s lives. Congratulations to all, and we have the council that will do best for Culver City at this time.”

When City Clerk Martin Cole said “Your term of office has come to an end, please step down from the dais,” there was a standing ovation from the entire audience.

The process of swearing in the new and returning council members was relatively swift. Council member Sahli-Wells, as the recipient of the most votes was sworn in first, with Thomas Small then the second and Göran Eriksson as third.

An uncontested motion and unanimous vote created Jim Clarke as the new mayor, and Jeff Cooper as vice mayor for the coming year.

With many thanks from the elected to their spouses, families, volunteers and supporters, the newly elected went right into agenda, and planned for the next council meeting on May 9, 2016.