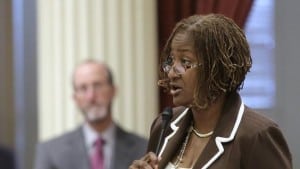 Did you know that your property can be permanently confiscated by law enforcement using a practice known as “civil asset forfeiture”? Did you know that the burden is on you, the property owner, to prove your innocence despite there being no evidence of a crime being committed?

“Policing for profit” has perverted law enforcement’s priorities by offering them a direct financial incentive to disproportionately steal from low-income people of color without even charging someone with a crime. In California alone, police pocketed nearly $600 MILLION from Civil Asset Forfeiture between 2006 and 2013.

This is wrong and it must be stopped!

YOU state senator, Holly Mitchell, has authored a bill, SB 443, that will require California law enforcement, paid for with California tax payer dollars, to enforce and adhere to California state law.

Her efforts to pass this bill have garnered support throughout the state having been endorsed by the LA Times, the Orange County Register and the Press Enterprise.

Additionally SB 443 has been actively supported by groups and legislators on both sides of the aisle. It is supported by several Labor groups, the NAACP, Immigrant rights groups, and many groups that lobby for prison and police reform which includes some conservative/libertarian groups.

California law enforcement should be funded adequately and appropriately, and should not include the forfeited property of innocent people.

Mitchell states “I need the support of all constituents concerned about property rights and equitable treatment by law enforcement.”

Please go to act.couragecampaign.org/sign/CivilAssetForfeiture_CA/?utm_source=SB+443+CAF&utm_campaign=Thank+you+2014&utm_medium=email to sign the petition to urge your Assemblymembers to support this critical legislation!