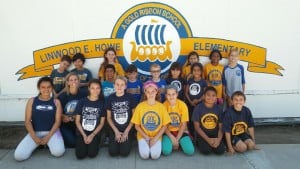 Schools applied for the award based on a model program or practice their school has adopted that includes standards-based activities, projects, strategies, and practices that can be replicated by other local educational agencies.

Linwood Howe Principal Dr. Kim Indelicato chose Whole Child / Student Engagement as the model program to highlight for the application. “In 2008, after interviewing multiple stakeholders, Lin Howe made the strategic decision to focus on the Whole Child,” said Dr. Indelicato. “This came out of the belief that it is extremely important for elementary school students to receive instruction and exposure to a wide variety of topics and to develop in all areas – academic, art, character, and social-emotional. The goal was, and continues to be, for students to graduate from Lin Howe not only mastering the academic standards, but also with experience in the arts and leadership, college and career exploration, a strong character and sense of self-worth, and a passion in an area(s) of their interest.”

Lin Howe’s application included multiple programs and practices that support Lin Howe’s commitment to developing the Whole Child, which in turn leads to high levels of student engagement and connectedness. Programs, many of which are signature Lin Howe programs, include Character Counts and Recognition Assemblies, Special Classroom Projects (such as the “trout in the classroom,” and “Culver City history” projects), an annual Science Fair, Sailing to Success for college and career awareness, Vocal Music, Student Buddy Programs, Art Programs, Cognitively Guided Instruction (CGI) Math, and a before-school Spanish Language Program.

In late March, a committee comprised of local educators spent a day on campus, observing programs and classes, and meeting with Dr. Indelicato, teachers, students and parents in order to verify what was written in the application. “The selection committee remarked on how well aligned all of the groups were with what was written in the application, and with each other,” said Dr. Indelicato. “The students received praise for demonstrating problem-solving skills and perseverance. The committee was also struck by how many colleges our students have visited through our Sailing to Success Program. Lastly, they commended Lin Howe for its strong sense of community, which was reflected in many conversations and felt throughout the day.”

In an announcement released by the California Department of Education, State School Superintendent Tom Torlakson said Gold Ribbon Schools “shine as bright beacons for others, putting forth an exemplary effort to ensure that every student is ready for 21st century college and careers. California teachers are developing an education model for the nation, training the students of today to be the problem-solvers, inventors, and pioneers of tomorrow.”

Out of nearly 6000 elementary schools in California that were eligible to apply, Linwood Howe is among 772 schools chosen throughout the state, and the only Culver City Unified School District elementary school. Lin Howe will be honored at a regional event in Los Angeles on Tuesday, May 24.