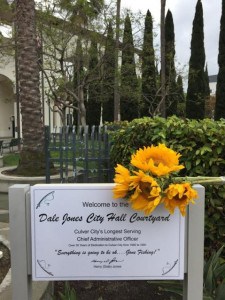 Harry “Dale” Jones served “The Heart of Screenland” for over 30 years, from 1961 until his retirement in 1991. He was remembered as a man who loved his city, working behind the scenes while giving the credit to others. Dale always looked at the bigger picture and was not concerned about getting the glory, but ultimately just getting things done to make this a better city.

The Jones family would like to express their deepest gratitude to this City’s leaders for their unanimous support for this honor and give special thanks to Assistant City Manager Martin Cole for the time spent organizing this informal unveiling (the formal unveiling will take place during the calendar year of Culver City’s centennial celebration starting in September of this year).