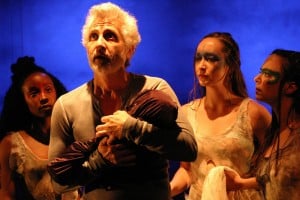 The venue was intimate, the audience held in close

began the play holding the center stage as most

other characters came to surround him after

Like steel shavings to a magnet, or moths to a flame

calling forth his servants, bound to honor his name.

by power not easily understood, must remain

with Prospero, who calls the tempest to the sea,

to wreck the unsuspecting ship of his enemy.

A trim and well shaped script, performers of great skill

Director John Farmanesh-Bocca bends them to his will

The four legged Caliban moves by drag and tumble

The shipwrecked crew is shown both mad and humble

The amplified Ariels speak through the air

Confounding the mortals who know not they are there

A fine play, offered with a charming modesty

Jack Stehlin and company play at the Odyssey

physical poetry, both seen and heard.

Friday  through Sunday, ’til April 23rd.