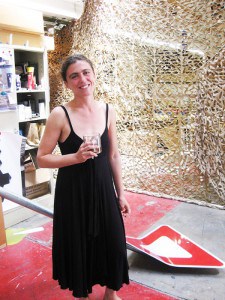 The Cold War collapsed in 1991, ending a reign of terror that balanced the Soviet Union and the United States on the brink of nuclear holocaust over world domination. What began 1957 left a legacy studied exhaustively in books, memoirs, biographies, scholarly non-fiction and popular fiction, film, theater and schoolbooks.
Culver City’s unique Wende Museum, the repository of memorabilia of those 46 years, has found yet another legacy of the ultimate war: art. Its newest exhibit will open Saturday from 4 to 6 p.m., featuring three artistic interpretations of the conflict gleaned from the museum’s archives.

The new Wende Museum (formerly the Armory) is still under construction 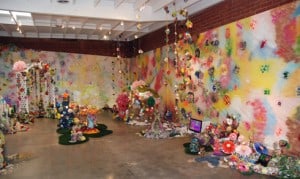 onCulver Boulevard, so the  show will be at the Fox Hills location.
The opening will feature remarks by artists Farrah Karapetian (pictured above with her work) and Jennifer Vanderpool (her work “Hysterical Paradise’ shown at right) and a preview of the show, with light refreshments. The free show runs through August 12 at the museum, 5741 Buckingham Parkway, Suite E.