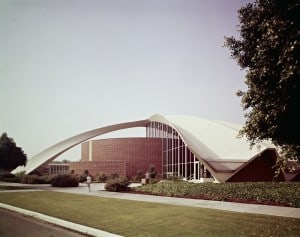 Craig Hodgetts, FAIA, and Hsinming Fung, FAIA, founding principals of Hodgetts + Fung Architecture and Design studio, will present their plans for the renovation of Robert Frost Auditorium to the public at the Culver City Historical Society on Weds., April 20, 2o16 at 7 pm. The meeting will be at the Vets Memorial Building, NOT at the Frost Auditorium. Known for “one of the most ambitious structural concrete domes in Los Angeles,” the 1,200 seat auditorium is being adapted to be used as a performing arts center while being preserved as an iconic performance space.

Built in 1963, Frost Auditorium has been in continuous use since it was first commissioned. Comprised of a 210-foot span folded plate concrete roof, it survived the 6.7 Northridge Earthquake in 1994, with no damage whatsoever to its 4 inch thick shell. The building has appeared in sci-fi movies including Gattaca and Woody Allen’s Sleeper.

As it is paramount to preserve and celebrate the existing structure, each element of the design was subject to careful consideration, including challenges brought on by the unique structural constraints of the thin-shell structure, ineffective and unhealthful air handling system, lack of vertical space for a “black box” theater, and seriously degraded surfaces and systems throughout the venue. With a new larger stage, enhanced performance qualities and back-of-house facilities, Frost Auditorium will be a fully functioning theater within an extraordinary concrete shell, and continue to be an icon for Culver City.

Veterans Memorial Building, 4117 Overland Ave., Culver City, CA 90230 This event is free and open to the public. For more information, contact the culvercityhistoricalsociety.org