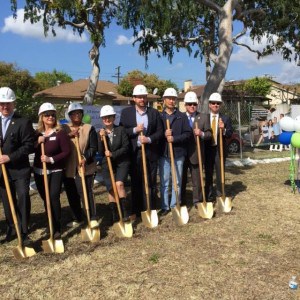 When Gov. Arnold Schwarzenegger fast-tracked the $1.1 billion dollar Sepulveda Pass Improvement Project on the 405 in 2006, the idea was to ease the traffic on the San Diego Freeway while a fringe benefit designated expropriated land to homes for low income families.
A decade later, the 405 remains possibly the worst bottleneck in California, but far below the freeway, a group of dignitaries, volunteers and officials gathered on Wednesday to witness the transfer of land along Globe Avenue in Culver City to Habitat for Humanity for ten affordable homes.
Culver City bought the land from CalTrans for $3.1 million in 2005, said Tevis Barnes, Culver City Housing Administrator. The city has consulted with neighbors from the beginning, and plans were modified from 14 homes to 10, and from low low income to a break out of 4 low income, 4 moderate income and 2 designated as ‘workforce.’ Delays in getting the project started nearly caused CalTrans to buy it back, she said, but the modified plans kept the plan moving forward.
Construction is to begin in December and is expected to last slightly more than a year. Ten sponsor groups, most from Westside faith-based groups, will use the time to raise $150,000 for building materials and expenses for each home.
These same groups will also supply volunteer workers to build the homes in what has become a familiar scene made famous by former President Jimmy Carter, an early Habitat supporter and volunteer. Founded in 1976, Habitat spread to Los Angeles in 1990 when Habitat LA of greater Los Angeles was created. The Globe Avenue Project is the first in a 5-year, $100 million project to build affordable homes in on the Westside of Los Angeles.
The current plan for six single and four attached Craftsman style homes was 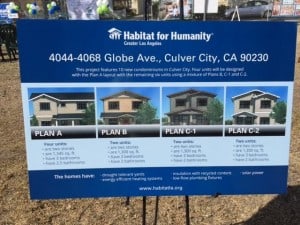 approved four years ago and accepted by the Culver City Planning Commission last week. Transfer of the land from the Culver City to Habitat means the project is now underway, with a timeline that will open the homes to residents in 2017.
The families, selected from a possible 1,000 applicants, according to Robert Dwelle, HabitatLA’s Director of Housing Development and Design, will have met stringent criteria, attended workshops on budgeting, home ownership and maintenance and contributed up to 500 ‘sweat equity’ hours constructing their homes. They will have bought the homes using no-profit loans. And when they move in, they will be the first affordable home owners on Los Angeles’s west side. Culver City has recently built two affordable rental housing projects, but not ownership, Barnes said.
“We will proudly welcome new residents to Culver City,” Mayor Michael O’Leary stated at the kick-off ceremony, “and celebrate their new beginning.”