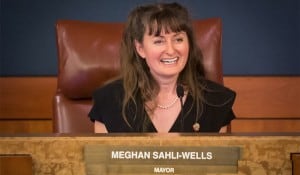 With less than three weeks before the election April 12, Culver City Police Officers Association has joined Culver City Firefighters Association, Employees Association, and a growing roster of notable individuals and organizations in their enthusiastic praise for Sahli-Wells’ leadership, and their support for her re-election to the Culver City Council.

Culver City Police Officers Association President Luis Martinez echoed other endorsements Sahli-Wells has received, emphasizing her record of achievement, and her ongoing work to improve Culver City services, financial accountability, community engagement, and quality of life. “Meghan Sahli-Wells has been a consistent advocate for the Culver City Police Department,” said Martinez. “She has managed her leadership responsibilities on the Council with fairness, intelligence, and diligence, prioritizing the continued health and safety of our communities, our police officers, and all Culver City residents. We would all be fortunate to have her continue her work on the Council.”

Culver City Firefighters Association President David Rindels stated, “We have complete confidence in Meghan. She is able to weigh the issues affecting our Fire Department with fairness, respect, and an abiding concern for the welfare of our firefighters and the public at-large. She has earned our trust as well as our endorsement.”

“Sahli-Wells has continually proven herself during her first term as a Councilmember,” emphasized Culver City Employees Association President Scott Newton. “She knows how to serve the needs of our communities and our employees while keeping a steady hand on the City’s finances. She takes her governing duties seriously and works hard to keep City government on the right path. We wholeheartedly endorse her re-election.”

During her first term on the City Council, Sahli-Wells helped turn the City’s budget deficit into a surplus while increasing government transparency, supporting sustainability policies, and building productive partnerships on the local, regional and national levels. Her platform includes goals and policies to maintain a healthy, safe and sustainable community with excellent City services, and a thriving economy.

In-person voting for the Culver City Council election will be held April 12th. Polls are open from 7am to 8pm. Go to www.lavote.net/locator to find your polling place.