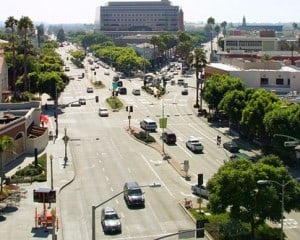 Culver Citizens will celebrate the city’s 100th birthday with a parade, poetry, parties, a gala and a full year of events celebrating the city’s colorful history from Screenland to Silicon Beach.
The celebration starts this spring with art contests at Culver City’s 24 public and private schools, where students will design banners that will drape the city come September.
The Centennial year begins September 20, but events are planned for weekends for maximum appeal, so the kickoff is a parade on Sept. 24. The Culver City Centennial Celebrations Committee (CCCCC) has been up and running for a year to plan the celebration year.
“We want organizations, businesses and groups from or serving Culver City to take part,” said Opening Ceremonies Chair Paul Jacobs. The 7-block route will stretch from Veterans Park on Culver Blvd. east to LaSalle, two blocks from where the opening ceremonies will toast Harry Culver’s statue by the Culver Hotel at 11 a.m. Applications are online at the CCCCC website culvercity100.org.
There will be speeches, politicians and ambassadors from Culver City’s four sister cities in Japan, South Korea, Canada and Mexico and the time capsule buried at the 75th anniversary in 1992 will be opened. A block party with picnicking on the Sony Studios lawn, vendors, food stations, live local entertainment and activities for children supplied by the Culver-Palms YMCA will top off opening day.
One Saturday later on Oct. 1, an invitation-only gala sponsored by and at Sony Studios is planned. There will be a buffet by Wolfgang Puck, swag bags with souvenir wine glasses, a trip through Culver City highlights by City Historian Julie Lugo Cerra and music by the Culver City Academy of Visual & Performing Arts band.
“We need 2 to 3,000 names to get 600 guests,” said outgoing CCCCC Chair Jim Clarke. He urged the 11 member board of directors to submit names for a master list of sponsors, volunteers and supporters that LA Consulting will use to send out Save the Date invitations to.
“At $125 a ticket, we don’t know how many we’ll get,” Clarke said.
Fortunately, the pressure for finances has been eased by early and generous donations, said treasurer Darrel Menthe.
“We planned to raise $100,000 but as of Friday (March 11), we have $142,000. Our expenses are $3,200.”
As a result, the committee will be accepting, but not pressing for more donations, Clarke said.
Eleven events were officially accepted in the centennial year’s schedule, from the City Poet Laureate Janet Hough, Culver City chamber music and symphony orchestras, library, women’s club, PTA and five from the Historical Society. “We want groups who will do their own activity,” Jacobs said. “We don’t have the resources to run events. More information and applications are on the website.
“Culver City is 5 square miles,” Clarke said, “we want all areas included.”
A possible addition to the opening festivities could be the Heart of Screenland Studio-to-Studio 5k Run. Mike Cohen presented the concept at Tuesday’s meeting, including running through the Sony rainbow onto a yellow brick road on the Centennial Trail marked with 100 city highlights and a tour through the backlot at Culver Studios. Response was generally favorable, but approval will wait until future meetings as well as setting a date.
Closing ceremonies will also not conform to the calendar year. A party for grown-ups with a name band is planned for Friday, Sept. 16, 2017, and family games, entertainment and birthday cake on Sat. the 17th. Culver City will be 100 on September 20, 2017.
If residents and fans miss any of the events, speeches or activities, the whole year will be videoed, Clarke said, with copies available to the public. His proposal for an Executive Committee of the committee’s senior officers to see to business between monthly meetings was approved. Clarke plans to resign as head of the Centennial at the April meeting in time to assume the mayor’s position on city council.