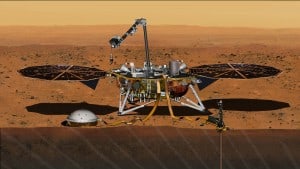 NASA’s Interior Exploration using Seismic Investigations, Geodesy and Heat Transport (InSight) mission to study the deep interior of Mars is targeting a new launch window that begins May 5, 2018, with a Mars landing scheduled for Nov. 26, 2018.

InSight’s primary goal is to help us understand how rocky planets—including Earth—formed and evolved. The spacecraft had been on track to launch this month until a vacuum leak in its prime science instrument prompted NASA in December to suspend preparations for launch.

InSight project managers recently briefed officials at NASA and France’s space agency, Centre National d’Études Spatiales (CNES), on a path forward; the proposed plan to redesign the science instrument was accepted in support of a 2018 launch.

“The science goals of InSight are compelling, and the NASA and CNES plans to overcome the technical challenges are sound,” said John Grunsfeld, associate administrator for NASA’s Science Mission Directorate in Washington. “The quest to understand the interior of Mars has been a longstanding goal of planetary scientists for decades. We’re excited to be back on the path for a launch, now in 2018.”

NASA’s Jet Propulsion Laboratory in Pasadena, California, will redesign, build and conduct qualifications of the new vacuum enclosure for the Seismic Experiment for Interior Structure (SEIS), the component that failed in December. CNES will lead instrument level integration and test activities, allowing the InSight Project to take advantage of each organization’s proven strengths. The two agencies have worked closely together to establish a project schedule that accommodates these plans, and scheduled interim reviews over the next six months to assess technical progress and continued feasibility.

The cost of the two-year delay is being assessed. An estimate is expected in August, once arrangements with the launch vehicle provider have been made.

The seismometer instrument’s main sensors need to operate within a vacuum chamber to provide the exquisite sensitivity needed for measuring ground movements as small as half the radius of a hydrogen atom. The rework of the seismometer’s vacuum container will result in a finished, thoroughly tested instrument in 2017 that will maintain a high degree of vacuum around the sensors through rigors of launch, landing, deployment and a two-year prime mission on the surface of Mars.

“The shared and renewed commitment to this mission continues our collaboration to find clues in the heart of Mars about the early evolution of our solar system,” said Marc Pircher, director of CNES’s Toulouse Space Centre.

More information about NASA’s journey to Mars is available online at:
www.nasa.gov/journeytomars