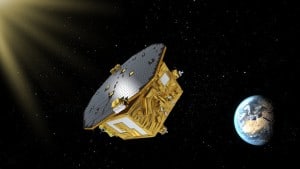 Following a long series of tests, the European Space Agency’s LISA Pathfinder has started its science mission to prove key technologies and techniques needed to observe gravitational waves from space.

Predicted by Albert Einstein a century ago, gravitational waves are fluctuations in spacetime produced by exotic astronomical events such as supernova explosions or the merging of two black holes. Recently, the first direct detection of these waves inaugurated the era of gravitational astronomy.

A future observatory in space, sensitive to gravitational waves with longer wavelengths than those detected on the ground, would be an essential tool to exploit this new field of study by probing some of the most massive and powerful objects in the Universe.

The LISA Pathfinder mission was launched in December, 2015, from Europe’s spaceport in French Guiana. This space-borne observatory, now operating at a “Lagrange Point” millions of miles from earth, is designed to achieve the purest-known “freefall,” the extremely challenging condition necessary to build such an observatory. To do so, the team released two test masses—a pair of identical 2 kg gold–platinum cubes measuring 46 mm—inside the spacecraft, and is now verifying that they are truly moving under the effect of gravity alone.

This is by no means trivial: Even in space, there are forces capable of disturbing the cubes—including the radiation and “Solar wind” from the Sun—and the cubes need be isolated from all of these non-gravitational influences. To do so, LISA Pathfinder continually measures their positions and maneuvers around them with micro-thrusters to avoid ever touching them.

“As they fall freely through space, the two test masses should be extraordinarily still, since no other force is perturbing their gravitational motion—only a gravitational wave could jiggle them around,” explains Stefano Vitale of University of Trento and INFN, Italy, Principal Investigator of the LISA Technology Package, the mission’s core payload.

LISA Pathfinder, however, is not capable of detecting gravitational waves itself. For this crucial technology demonstration, the two freefalling cubes are only 38 cm apart—too close to record the minute wobbles in the fabric of spacetime.

The variation in distance caused by a passing gravitational wave is so small that a full-scale space observatory will need test masses separated by roughly a million kilometers, and be able to detect changes in that separation of about one millionth of a millionth of a meter.

“The precision we need to attain for future observations of gravitational waves from space is so high that it demands an unprecedented understanding of the physical forces at play on the test masses,” says Paul McNamara, ESA’s Project Scientist.

After having released the cubes from their locking mechanisms and having made sure they are in the most precise freefall ever obtained, the scientists will now spend the next six months running experiments, “poking” the masses to verify how still they really are.