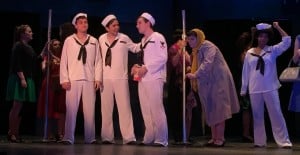 An instant hit that has enjoyed multiple revivals, On the Town follows the story of three sailors on 24-hour leave in New York City, encountering adventure, hijinks and romance along the way. The musical integrates dance into its storytelling and features several show-stopping ballets and dance sequences.

Showtimes include March 11, 12, and 18 at 7 p.m.; March 13 and 19 at 2 p.m.; and March 19 at 8 p.m. The March 19 show will feature understudies. Tickets are available at the box office prior to performances. Prices: $15 for adults; $10 for seniors, CCUSD staff and high school students; $5 for CCHS students with ASB cards and CCMS students; free for children in elementary school and younger with an accompanying adult.