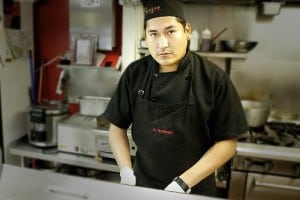 You may not have heard of Walther Adrianzen – a 28-year-old Peruvian-American chef – but if you’ve sought out any of L.A.’s more avant-garde Peruvian cooking in the past year or two, there’s a good chance you’ve tried his food. He’s responsible for such dishes as tangy ceviche laced with mango, grilled octopus and bitter black olive sauce, and pan-seared lomo saltado with filet mignon.

Adrianzen’s first big opening was Venice’s El Huarique back in 2013, 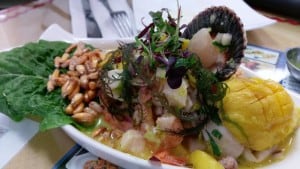 which served the Peruvian answer to sashimi inside a cramped food stall on the boardwalk. After that, he bounced around for a while, opening the now-closed C-V-CHE in East Los Angeles, consulting as chef at Misky Misky in Covina, then spending a few months as chef at Picca in West L.A.
Now he’s landed inside Lonzo’s, a small bakery in Culver City operated by his aunt and uncle, where he’s serving pretty much the same ambitious menu from C-V-CHE, filled with dishes like mixed seafood fried rice, steamed mussels crowned with crab meat and salsa criolla, and seco de cordero, a beer-braised lamb stew fragrant with cilantro. 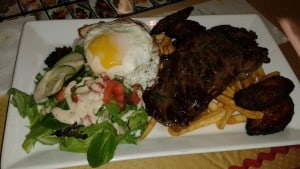 As with his previous restaurants, the star here is ceviche, which may as well be Peru’s national dish. A world away from Mexican-style ceviche, the Peruvian version includes cubes of fish, shrimp and calamari drenched in the famed sour citrus marinade known as leche de tigre, paired with oversized corn kernels called choclo and soft wedges of sweet potato. The cheaper option at Lonzo’s involves basa fish, but you can upgrade to sea bass — and the plates are big enough to share.

People have taken notice. He’s had to add more seating for his growing clientele, who show up for dishes like arroz chaufa de mariscos, choritos a la chalaca (steamed mussels topped with salsa criolla and crab meat), and seco de cordero. 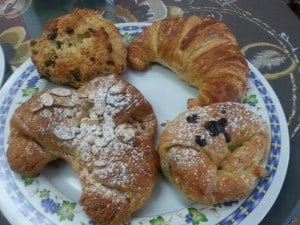 Stop by to check out this unconventional “pop-up” and then take some of Lonzo’s wonderful bread and pastries for the road.