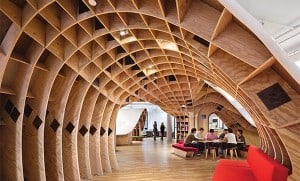 Preparations are underway for this Wednesday evening’s one-of-a-kind fundraiser, supporting Thomas Small’s bid for one of three open seats on the Culver City City Council.

The world-renowned architect Clive Wilkinson, who has designed spaces for some of the most creative companies in the world, will host the event, which begins at 7 p.m., in the offices of Clive Wilkinson Architects, 6116 Washington Blvd., Culver City, CA 90232.

“If you’ve never visited the office of a busy, successful architecture firm,” Thomas Small said, “you’re in for a treat. At Clive’s office, models and sketches abound. And it’s a spectacular space, designed by the man himself, of course.”

Guests will be able to engage in one-on-one conversations with 10 of the architects who today are designing Culver City. Thomas Small will facilitate this opportunity by introducing these architects to the audience. 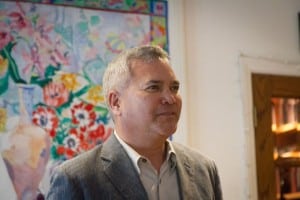 will join us for discussion about the design and future of our city,” Small said. “These conversations are unprecedented. And this group of individuals may never all be in the same room together again, talking one-on-one with Culver City residents. The views, perspectives and insight into the future of Culver City will not be available anywhere else.”

“There will be additional prominent architects there too, supporting me. I’m grateful to them all,” Thomas Small said.

“This event is a hybrid. It’s one part spin off of the Architecture Talks, which I created in the last couple of years to engage Culver City residents and city leaders in a conversation about the potential of excellent design to improve a community. I initiated the Talks and moderated them as a commissioner on the Culver City Cultural Affairs Commission.

“And this event is one part pure celebration,” Small said. ”We’ll have music and spoken word by the celebrated jazz bass player John B. Williams, a fellow Cultural Affairs Commissioner, as well as guest artists. John is a Culver City gem.

“We’ve engaged yet another Culver city gem, celebrity chef Spencer Gray, to provide sumptuous refreshments, which will be topped off with champagne.

“We’re exhibiting fascinating Culver City architectural models, including one of the re-model of the iconic Robert Frost Auditorium at Culver City High School.

“And—les voila!—we’ll have a silent auction of numerous original architectural sketches, drawings and renderings unavailable anywhere else, by a number of architects, among them Michael Lehrer. A stunning photo of Culver City taken from the Baldwin Hills Overlook by the Culver City-based photojournalist David Buchan will also be auctioned.”

Thomas Small will address his guests, providing a few of his own perspectives on conscientious development, opportunities for growing the city’s creatives businesses, and ways to engage more residents in the city’s civic life.

“I must say—one of the joys of running for public office is sharing with my supporters my love of architecture, wonderful music, art, delicious food, and–of course–ideas. Between the architects, the food, the performers and the auction items, having all of this incredible Culver City talent in the same room for one night is truly special,” Small said.

Thomas Small is an expert in the fields of architecture and historic preservation, urban and sustainable design and conscientious development, and an architectural writer. He collaborates with architects, designers, engineers, developers and communities to create and enhance architectural projects, neighborhoods, and developments.

Tickets for the fundraiser can be purchased online at www.eventbrite.com/e/thomas-small-for-city-council-designing-the-future-culver-city-tickets-21322665667  The cost is $100 per person or $150 per couple.

Rebecca Rona-Tuttle is a member of the Thomas Small for City Council Campaign Committee.