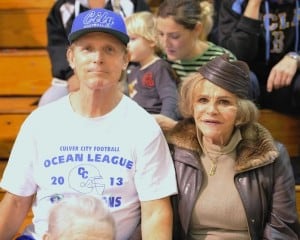 Although she was married 4 times, she found the love of her life in 1999 when she met Greg Goodyear, a teacher at Mountain View High School and a coach at Culver City High School. They met on a chat line and talked for three months before their first meeting, and they hit it off immediately.

Within a couple of months they decided to date each other exclusively and remained an item from that day forward.

One of the reasons she and Coach Goodyear got along so well was their mutual love of football. She was a season ticket holder for both the Rams and the Raiders. And she became a regular at Culver City High School sporting events going to football games both home and away. She could also be seen courtside at both the boys and girls basketball games.

Lesa was born in Chicago to Anna Molignoni and Cesare Ciabatti. She spent her early years in the Chicago area. Near the end of the war, Cesare heard about good jobs in Southern California and decided to go west. He was able to find one of these jobs. He returned to Chicago and convinced his family to move to the land of opportunity in California. The family moved into a home with another family and began looking for a house of their own. Finally they found a home near the Mount Washington/Eagle Rock neighborhood.

She and her older sister Dolores had a strict upbringing. They both attended Saint Dominics Catholic School in Eagle Rock. Lesa took an early interest in her mom’s cooking and became an outstanding chef cooking many family dinners.
Over the years she became quite the gourmet. After graduating from Saint Dominics, she went to Eagle Rock High School where she graduated in 1953. Her father was very protective of both of his daughters and wanted them to come right home after school, but he did allow Lesa to go to some after school activities and she especially enjoyed the football and basketball games. This is where she developed her passion for football.

Lesa wanted to leave home at an early age. Her first job was at the Gas Company. Later she worked as an executive secretary for Mr. Fredricks of Fredricks of Hollywood fame. She also worked as a copywriter for a company that did games and puzzles for newspapers and magazines across the country.

But Lesa dreamed of becoming an interior designer. She took classes at UCLA and she was proud to call herself a Bruin.

Rather than starting out as an apprentice she decided to opened up her own design and retail store, Longstreet Design, in Redondo Beach in 1980, a bold move for a woman in those days. A few years later she relocated her business to Hillside Village on Hawthorne Boulevard in Torrance, and she stayed at that location for well over 20 years. She was proud to say that from the grand opening to the day she closed her store there was never a time when she did not have a client.

Ms. Longstreet was very special in that she was not only extremely creative, but she was also very well organized, a rare combination of qualities. Her ability to organize was very well expressed in her neatness both of dress and in her home.
Although she was more than willing to travel for a client, most of her business was concentrated in the Palos Verdes Peninsula.

Lesa was an avid weightlifter and after work she did an hour and a half workout at Golds Gym five days a week. She was a certified personal trainer and very knowledgeable about nutrition.

She loved the beach, boating and snow skiing. She got her Naui scuba diving certificate in 1974.

She is survived by the other love of her life, her son who is ironically also named Greg. Greg is very talented at drawing and worked with his mom bringing her ideas to life on paper with sketches and renderings.

She is also survived by her sister Dolores Tomasello, her nephews Ches and Sam and her nieces Anita, Nancy, Rose Anne and Lesa.

Food for the ceremony will be provided by BJ’s Brewhouse in Fox Hills, 7-11 on Sepulveda, and Sorrento Italian Market.

In lieu of flowers the family requests a donation of any size to: gofundme.com/lesalongstreet.