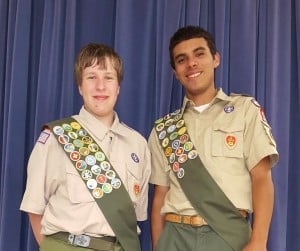 Boy Scout Troop 113 is pleased to announce its most recent scouts to earn the highest rank of scouting – Eagle Scout. Michael Rodriguez and Avishai Melamed both completed their Eagle Scout Projects in September 2015 and both passed their Eagle Scout Board of Reviews on December 10, 2015.

Avishai Melamed was inspired to join scouting after a family camping trip to Mt. Pinos when he was 5 years old. Avishai observed a Boy Scout troop camped nearby and was determined to become a scout. Shortly afterwards, Avishai joined Cub Scout Pack 5. Over the next 5 years he participated in numerous scouting and camping activities and rank advancements, and earned the Cub Scout “Arrow of Light” award. After bridging from Cub Scouts to Boy Scout Troop 113, he continued his scouting activities, leadership training, community service and rank advancements for the next seven years. He currently serves as Assistant Senior Patrol Leader.

Michael Rodriguez has been a committed member of Boy Scout Troop 113 for 8 years. He has flourished as a young, resourceful man of service to others, and served as Senior Patrol Leader of Troop 113. After completing all of his prerequisites as a Boy Scout, Michael went through the rewarding and successful process of becoming an Eagle Scout.

For his Eagle Project, Michael decided to help beautify the Richard Henry Dana Middle School by reconstructing dilapidated, 15 year old garden boxes that were deemed unusable. To this end, Michael divided his project into three well-organized parts that would ensure the completion of the significant task ahead of him. First, the ten old boxes were demolished and removed from the site. This process included the removal and disposal of old dirt and other debris. Second, Michael designed and constructed 10 brand new garden boxes off-site, using durable, fresh wood and a design that would last for years to come. Finally, Michael oversaw the transport and layout of the new garden boxes, which included securing waterproof plastic to the inside of each box for the purpose of extending the life of these new boxes. The overall project positively impacted the school community by providing a location for students to start a garden for curricular and extracurricular purposes.

Michael is an exemplary leader who is a senior taking AP and Honors classes at Loyola High School, Los Angeles. He plans to go to college and pursue a degree in one of the hard sciences.

Avishai typically has a book “glued to his hands”. Inspired by his love for books and literature, he led an Eagle Project with the dual purpose of promoting literacy and interest in literature within Culver City, as well as supplying literary resources to underfunded schools with limited access to literature. The first part of his project was to inspire young children in the community to become readers by participating in a public literacy event held at Blanco Park. Culver City families were invited to participate in a fun literacy event in which the scouts shared their favorite books and led book inspired art projects geared for young readers. The second part of his project was collecting books for underfunded schools with limited access to literature. Participating families collected donations of books for “Children’s Book Recycling Center” the charitable arm of Children’s Book World. The non-profit provides books to needy children in Southern California schools.

Avishai is a senior at Culver City High School and an AP Scholar with Honor. He plans to attend college and pursue a career in the social sciences.

Based at the Culver City Scout House, BSA Troop 113 is proud of these two young men and of the troop’s 61 years of service to Culver City. The troop website is: bsatroop113.org.