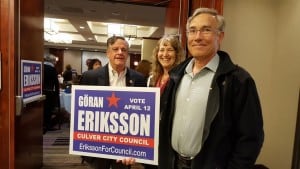 Supporters of Göran Eriksson crowded into a room at the Culver City Courtyard by Marriott Hotel to support his run for a seat on the Culver City Council in the April 12 election.
“I am humbled by the amount of support I have been receiving,” said Eriksson, who added that he has enjoyed the new experience of running for office. “Wherever I walk, I meet new people – people who tell me they love living in Culver City and that we need to work hard to maintain our quality of life.”
Eriksson told the sold-out crowd at his fundraiser that he intends to focus on several key issues during the campaign, including being prudent with city finances, maintaining Culver City’s quality of life and putting neighborhoods first.
Eriksson has a long track record as a successful businessman and community activist and has already received endorsements from four of the five sitting City Council members: Mayor Micheál O’Leary, Vice Mayor Andy Weissman and Councilmembers Jeff Cooper and Jim Clarke.
“There were a number of elected and former elected officials at the fundraiser, and I had the opportunity to talk to them about what it takes to run our city,” Eriksson said. “I’m always learning. Whether it’s listening to voters on their porch or discussing policy issues with our Council members at City Hall, I’m encouraged about the future of our city.”
As chairman of the city’s Finance Advisory Committee, Eriksson has led the committee in making recommendations to increase community involvement in the city budget process, update the city’s current financial policies and extend the city’s long-term financial forecast. In addition, under his leadership, the committee has developed a Measure Y quarterly fact sheet and communication plan, made recommendations regarding the city’s financial transparency strategy and made recommendations regarding the communication of financial information on the city website.
Eriksson also serves as the vice chair of the Culver City Unified School District’s Citizen Bond Oversight Committee, where he helps keep the public informed of the expenditures of the bond proceeds and ensure that bond proceeds are used only for the purposes set forth in the Measure CC bond.
“I believe I have the background and experience necessary to keep our city on firm financial footing while making the tough decisions that will guide us into the future,” said Eriksson, who also served as a member of the Culver City Advisory Committee on Redevelopment. “I believe in protecting our quality of life, enhancing city services and sustainability and moving our city into the future while maintaining its small-town charm. But at the heart of all of that is the need to make prudent financial decisions so that Culver City can continue to provide the services we all have come to expect.”