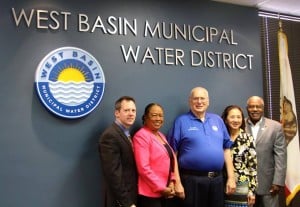 At the January board meeting, the West Basin Municipal Water District (West Basin) Board of Directors elected Director Carol W. Kwan to serve as its board president and Director Harold C. Williams to serve as its board vice president for 2016. Directors Scott Houston and Donald L. Dear were named board treasurer and board secretary, respectively. Director Gloria D. Gray, who previously served as the board president, was named immediate past president.

“I am honored to be elected by my board to serve as West Basin’s board president,” said Kwan. “I look forward to working with my fellow board members to provide water reliability for our region. This means maximizing our recycled water and conservation programs, and continuing to investigate ocean water desalination as a possible drinking water supply in the future. In 2016, we are especially excited to further develop our ocean water desalination program. We are in the process of preparing an Environmental Impact Report that will evaluate the impacts of a proposed ocean water desalination facility and we will share our findings in summer 2016.”

This year marks 20 years of Director Kwan’s service to the West Basin Board. She was first elected to the West Basin board in 1996 as the first female and Asian-American member to serve on the board. Kwan represents Division III which includes the cities of Hermosa Beach, Lomita, Manhattan Beach, Redondo Beach, and the unincorporated area of Torrance (Harbor Gateway). Director Kwan also serves as a board member of Cal Desal, a statewide organization that promotes the understanding of the future need for ocean water desalination projects in California.

Serving the cities of Division I which include Carson, the Palos Verdes Peninsula and portions of San Pedro is newly elected Board Vice President Harold C. Williams. He has held leadership positions in numerous civic organizations and served on various city commissions. Most recently he was a member of the Carson Utility Users’ Tax Citizens Oversight Committee, which he chaired for two years. Williams served as president of the American Public Works Association-Southern California Chapter, president of the City and County Engineers Association, and treasurer of the Los Angeles Council of Black Professional Engineers. He is also a board member of the National Water Research Institute. Williams recently received the 2015 Top Elected Official award from the Southern California Chapter of the American Public Works Association.

Division IV Director Donald L. Dear was first elected to the West Basin Board of Directors in November 2000 to represent the cities of Gardena, Hawthorne, Lawndale and portions of El Camino Village. He is one-of-two West Basin’s representatives on the Metropolitan Water District Board of Directors. Director Dear has a vast array of experience in public service, serving as the Gardena mayor for nine consecutive terms before retiring in 2001. Since 2004, he has also served on the Local Agency Formations Commission and is currently first vice chair. He is also a widely respected, award-winning teacher who taught at Stephen White Middle School in Carson for 37 years.

Director Gloria D. Gray, who was the board’s immediate past president, was elected to the West Basin Board of Directors in 2006 as the first African-American woman elected to the board in its near 66-year history. She represents Division II serving the cities of Inglewood, South Ladera Heights, a portion of Lennox and Athens, Howard and Ross-Sexton. Director Gray currently serves as vice chair on the Metropolitan Water District Board of Directors, and has been elected for the second term as an at-large member of the Santa Monica Bay Restoration Commission Governing Board. She was also a former member of the Delta Stewardship Council.

West Basin is governed by a five-member board of directors who represent 17 cities throughout its 185-square mile service area in coastal Los Angeles County. The district is committed to providing a safe and reliable supply of high-quality water to its communities.