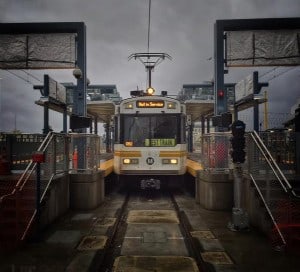 The Expo Line’s extension from Culver City into Santa Monica is so close to being ready for riders—on Friday, the construction authority charged with building the rail line formally handed the whole thing over to Metro. Santa Monica Next says that this means that Metro can start pre-revenue testing and service; once an Expo maintenance facility is also handed over, the line will be deemed “substantially complete.” That’ll be a big day, because within 30 days of substantial completion, Metro officials are expected to announce what we have all been eagerly waiting for: the date that the Expo Line extension will open, bringing passenger trains back to Santa Monica for the first time since 1953.

The Expo Construction Authority, which built the line, previously guessed that the train line would open in April or May of this year, but that’s not their call, so it is just a guess. Metro’s the one that decides when the rail line will open and so far they’re officially adamant that the opening day is still up in the air. There’s no word on when the Expo maintenance facility will be completed and handed over to Metro, but “some observers” are betting that it happens sometime later this month. Whenever it occurs, it’ll kick off a chain reaction that ends in the big reveal of the Expo Line’s opening day, and then of course, opening day itself.