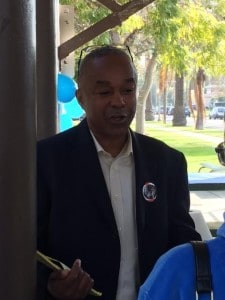 While council candidate Marcus Tiggs offered a ‘meet the candidate’ barbeque at Carlson Park on Saturday, January 16, Daniel Lee greeted supporters at the home of school board member Kelly Kent on Sunday the 17th. It was the beginning of what will be several intense months of campaigning for these two with eight candidates running for three seats in April.

Tiggs (pictured left, speaking at the event) had the tables at Carlson Park laden with food and campaign literature, but the weather wasn’t as inviting as it might have been, and not many people attended. Rather than be dismayed, the candidate used this to his advantage, taking the time to talk one on one with prospective voters and settling into conversations with people newly arrived to Culver City.  While Tiggs’ volunteers may have outnumbered the visitors, people seemed to leave feeling a little more connected. 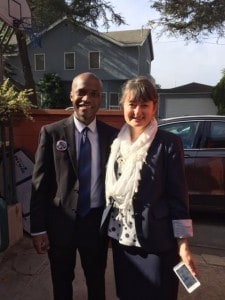 crowd to those who were already involved in the campaign. While the invitation was open to the public, the private location may have been too insular for the curious to venture in. The candidate did take time to shake hands and talk, but much of the afternoon was given to introductions and speeches that did not offer anything new.

A very comfortable public speaker, Lee (pictured right with council member and candidate Meghan Sahli-Wells) offered his answers to the question most often asked of a candidate “Why do you want to run?” and “If you are elected, what are you going to do?” Focusing on the environmental challenge of the Inglewood Oil Field, he also addressed the issue of how to expand community while including both residential and business interests in the focus.

The fact that Culver City has never had an African-American council member in it’s hundred year history is one that neither candidate is making a central point in their campaign. While they happened to choose the same January weekend to host events, Tiggs and Lee are coming toward the election from almost opposite ends of the spectrum, with Tiggs offering his leadership with military experience, and Lee standing on his history as a community activist.  The next few months will offer a great deal more on how they plan to sit on the dais at City Hall.