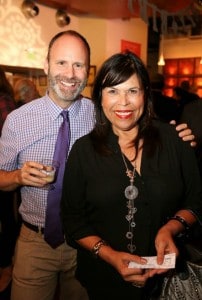 Diane Rodriguez, Center Theatre Group’s Associate Artistic Director, was appointed by President Obama and confirmed by the United States Senate to be a member of the National Council on the Arts, the advisory body of the National Endowment for the Arts. Pictured left with CTG ‘s Director of New Play Development Pier Carlo Talenti at the 10th anniversary of the Kirk Douglas Theater, Rodriguez has been a great success in advancing both minorities and women into greater roles in the Los Angeles theater scene.
Director, writer and Obie Award-winning actor Rodriguez brings her considerable experience fostering greater visibility for Latina/o theatre, advancing a feminist presence in the arts, and playing a leadership role in theatre nationwide to help advance the NEA’s mission to give all Americans the opportunity to experience creativity and participate in the arts.
The National Council on the Arts advises the NEA chairman on agency policies and programs. It reviews and makes recommendations to the chairman on applications for grants, funding guidelines and leadership initiatives.
For 21 years, Rodriguez has been on the staff of CTG, which produces on three stages in Los Angeles: the Ahmanson Theatre, the Mark Taper Forum and the Kirk Douglas Theatre. In her current position and in her previous positions as associate producer/director of New Play Production and co-director of the Latino Theater Initiative at the Mark Taper Forum, Rodriguez has helped increase the diversity of voices on CTG stages and promoted the development of a new generation of playwrights.
Rodriguez co-founded the theatre ensemble Latins Anonymous whose two-play anthology, “Latins Anonymous” is in its 16th printing. Her latest play, “The Sweetheart Deal,” will be co-produced by the Latino Theatre Company and El Teatro Campesino in 2017 in Los Angeles.