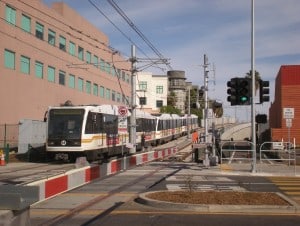 As the Expo Line Construction Authority puts the final touches on their 6.6-mile extension of the light rail, connecting its current terminus at Culver City to Santa Monica, it’s evident how much this $1 billion project has changed the notoriously car-dependent Westside. Not only have seven stations—some elevated, some at surface level—sprouted, but an adjacent bike path and walkway now runs from the currently-operating Culver City station to the terminus at 4th and Colorado. Even though it’s officially closed, people have started exercising and walking their dogs along the path (everyone should be careful to stay off the train tracks though, testing is underway and hundreds of people have been caught crossing the tracks).

While the line’s opening date is still a mystery, rumor has it an April or May ribbon-cutting is likely.