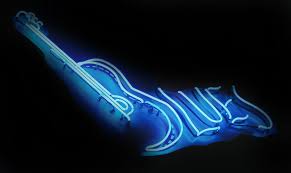 Before going to the Delta to find the blues, another thing had happened in my L.A. Blues experience. School was out, and I was totally preparing myself for this pilgrimage to the south; I’d be going by myself for three weeks. To get in the mood, I went to Babe and Ricky’s, a somewhat well-known blues club in Leimert Park. I went, just to listen, to the Monday night jam session.

That night there was a local blues musician, Southside Slim, who, sensing my interest in the blues, invited me to go to the juke joints in South Central LA. We met the following week and set out; I felt so at home I’ve never left since. There were these old, down-home guys who went out every weekend and did nothing but play the blues, just like their ancestors from The Delta had done.

When they saw me come back again and again, loving the music they loved so much, and dancing my heart out, they fell in love with me. They grew to expect me to be there. This probably was the first time that I’d felt so thoroughly accepted for simply being me. I felt like I was the authentic me, and they understood. Perhaps it was symbiotic; they delighted in the fact that they could make me feel such joy. My purpose was to feel it; I enjoyed going there and being with it. I didn’t care if I understood it, or if I knew a lot of facts. It was about experience, not knowledge.

I love Black culture, where people seem to be able to embrace themselves for who they are. There is a flamboyance, a self-confidence, and a no-nonsense approach to life that is attractive to me. The blues epitomizes some of these aspects. It’s not about happy endings, it’s about using humor and cleverness to ward off the tough feelings, i.e., the blues. I like that realism – dealing with life on its own terms. I was never drawn to quick and easy solutions to things. The fact that the blues dealt with life as it is lived appealed to me greatly.

The blues helped me embrace and focus on the feelings of any given moment. You’re never trying to pretend something’s different. There are also a lot of elements to the music that have great sensual appeal, and that sensual appeal is part of what I enjoyed. I think the blues can actually help a person be connected, “in the moment.” Mind you, not every song will do it. Just because they call it the blues, doesn’t mean it is.

A little bit about what these juke joints are like; you open a chain link fence into another world, right here in Los Angeles. I’ve often talked about the ever-present fire barrel in my work. The fire barrel, burning scraps of found pieces of wood, is a symbol for me of the heat of the blues, around which the community gathers, and celebrates. It’s a place to stay warm, and talk, much like they did in Native American culture (Ruth adds: or the “kotatsu” in Japanese culture). At the corner of 97th and Main, there’s a juke joint called “The Barnyard.” It’s a junkyard that by day, and by night, hosts people playing serious games of dominos – they call it “Bones” – a strategy game that uses math and combinations of numbers. (A google search suggested that dominoes are colloquially referred to as “bones” because the earliest tiles were made of animal bones or ivory, with ebony inlay).

Many documentarians love to show the seedy side of life in the African-American community, but what I’ve always done is different, and the people in the community knew they could trust me. There was always a hospitality piece. I came and showed respect, so I was welcomed. I always made it clear that I was there for the blues, and no social reasons. It helped that, from my earliest exposure to the Los Angeles blues scene, I was under the covering of Slim; he introduced me to the community.

I (Ruth concluding now) identify with this so deeply, having spent most of my life similarly captivated by cultures other than my own. I did my time as an outsider trying to break in alone, but also came to understand the perceptible difference when you are given entrée by an insider. Kari said that it was during this particular talk of ours that she first uttered the words, “I love Black culture.” I was shocked to hear that! I contradicted, “but what about the doll your mom gave you…” Kari replied, “I just never thought in those terms.”

But Kari gave scores of people an appreciation for African-American culture. She brought us to places – inviting us regularly to the clubs and juke joints by night, while guiding students by day on 8th grade English research reports on plantation life, the history of American musical genres that came from jazz and blues (all popular music!) or Maya Angelou’s writings. She had a way of making “The Glory Field” by Walter Dean Myers come alive. She influenced colleagues, including myself, to approach these subjects, representing an overlooked population in our student body.