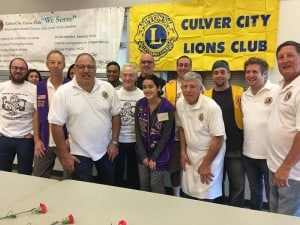 Weary from several long evenings of coordinating dinner preparation for 200 seniors, Culver City Lion Elliot Heffler paused on Thanksgiving Day to absorb the noble feeling of having served more than 10,000 dinners the past 40 years to seniors.
Chairing the annual event since its inception, Heffler said, “This project happens because our Culver City businesses are dedicated to providing their products and services to our seniors. Lion members always come through, often including family and friends to make the holiday bright for our golden agers.”
Meals are served at no cost to the seniors, as local companies and the Culver 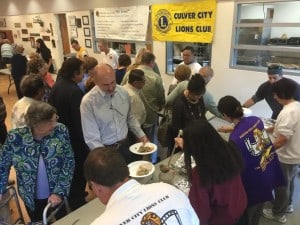 HOT FOOD: (Bottom Right) Culver City Lions serve meals to senior citizens, Thanksgiving Day, at the Culver City Senior Center. Lion officer Elliot Heffler has chaired the annual club activity for 40 years, during which more than 10,000 dinners have been provided at no cost to the seniors.
Photo Credit – David Heffler