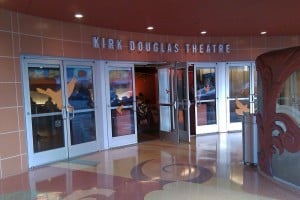 After reviewing over 230 play submissions, Center Theatre Group announced today that 10 finalists have been chosen for the first annual Humanitas/CTG Playwriting Prize. The award will be given to the best new, unproduced play written by a Southern California playwright.
The winning playwright will receive a $5,000 cash prize and an additional $5,000 will be given to a Southern California theatre to subsidize the play’s world premiere production. Two runners-up will each be awarded a cash prize of $2,000.
The winning and runner-up plays will be developed with CTG’s literary staff, led by CTG’s Director of New Play Development Pier Carlo Talenti, and presented in staged readings at the Kirk Douglas Theatre Rehearsal Room from February 12-14, 2016.
The winner and two runners-up will be announced at the annual Humanitas dinner on Monday, January 11, 2016, at the Directors Guild.
The 10 finalists and their selected works are Ngozi Anyanwu (“Good Grief”), Linda Bannister and James E. Hurd Jr. (“Turpentine Jake”), Aleta Barthell (“Window of Shame”), Louisa Hill (“Lord of the Underworld’s Home for Unwed Mothers”), Jennifer Lane (“Harlowe”), David Myers (“How to Conquer America: A Mostly True History of Yogurt”), Dan O’Brien (“Scarsdale”), Steve Totland (“You Are Here”), Stephanie Alison Walker (“The Madres”) and Marlow Wyatt (“SHE”).