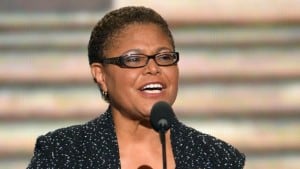 Culver City residents concerned about the noise, pollution and frequency of air traffic over the city were thankful to Congresswoman Karen Bass on Sunday. The two-term Representative used a Town Hall meeting as an opportunity for them to air their issues to officials from the Federal Aviation Administration after an official comments period had expired.
“I see your signs,” Bass told the near capacity crowd at the Teen Center. “’Don’t fly over my school,’ and ‘Raise the planes.’ I hear your concerns and have two representatives from the FAA here for you to talk to.” This statement was greeted by a burst of applause, which she acknowledged with a caution, “I know passions run high, please be professional and respectful.”
At issue is a proposed update to the way air traffic is operated in the SoCal Metroplex flying area, and how it will affect flight paths over Culver City. Regional Manager Glen Martin explained the FAA has been working on a draft for Project Next Generation, or NextGen, since 2012.
“NextGen will upgrade air traffic control to the Twenty-First Century,” he said. Aircraft are currently controlled by passing them along a series of ground beacons, which Martin called, “two-dimensional, last century technology.” NextGen uses satellite-based GPS, which could make flights safer, more efficient and “possibly even quieter,” according to a handout from the FAA. The final report on NextGen should be approved by the agency next spring, with implementation beginning next November.
“The public comment period is over, but the issues you bring up will be reviewed and checked of our report,” Martin said to more applause.
Culver citizens who lined up to ask questions expressed a range of concerns related to air traffic, from lead-based fuel polluting the air. “The majority of your comments are about noise and altitude.” Bass said.
Many residents, from long term to newcomers, said airplanes have both increased and flown lower over the city in the last two months, disrupting sleep, outdoor activities and students at Farragut Elementary. One business owner, who said she is moving her company to a quieter neighborhood, warned that Culver City’s crop of movie studios could follow suit if noise pollution affects the quiet they need to film.
Martin said no permanent changes have been made in flight patterns because NextGen has neither been approved nor implemented, but he promised to check the data for the last few months to see why residents may have noticed changes. Residents affected by air traffic at LAX, which had 70,663,519 total passengers in 2014 and is projected to increase by another 20 million when totals are complete for 2015. Culver citizens want flight paths higher and away from schools now before traffic increases even more.
The 37th congressional district stretches from USC to UCLA and includes West LA, Englewood and Culver City, encompassing 750,000 constituents. “There are 435 members of the House of Representatives,” she said. “There are a lot of concerns raised. I appreciate it when my constituents bring their concerns to my attention. Thank you.”
Although Next Gen was the main topic of the 90-minute meeting, Bass, who sits on the Foreign Affairs and Judiciary committees and Crime Subcommittee on sentence reform, the congresswoman deftly dealt with several other issues by addressing them or pledging to look into them or seek help from colleagues in Washington.
Jeffery Hilger, assistant director of the New Opportunities Charter School which is aiding 800 jailed inmates earn a high school diploma, said approved funding for the program has stopped. Bass said she would find the reason and get money flowing for the important program.
Concerns about immigration were quieted when she explained that the vetting process takes two years and by the end, 25,000 immigrant applications would be reduced to 1,000.
She also explained what it is like to work in a deeply divided Washington. “The perception is that nothing gets done except fighting,” she said, “but we have a budget for this year, we just need to pass the appropriations to fund programs before the end of the year.”
One constituent concerned about changes to solar power that will affect homeowners was told the infamous oligarch Koch brothers don’t like solar power and send money to prevent its spread, but she would look into the issue. To pass a bill, we used to go to colleagues and work compromises get votes, now they don’t need our votes. “Hearings are controlled by the Republicans,” she said, “but I can call for a briefing among my Democratic colleagues to get issues heard.”
Those with concerns can contact her at [email protected] or 323.965.1422. Her website is http://bass.house.gov/