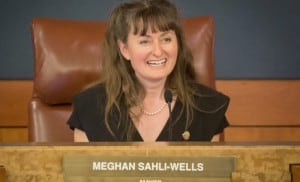 Meghan Sahli-Wells will kick-off her re-election campaign for Culver City Council on Saturday, December 5, 2-4pm, at the home of Bonnie and Matt Seeberger: 10714 Hepburn Circle, in Culver City’s Studio Estates neighborhood. Sahli-Wells welcomes all who are interested to attend the event, find out more about her campaign, her past service, and her vision for the future of Culver City. She is running for one of three City Council seats in the election scheduled for April 12, 2016.

Sahli-Wells has served with distinction on the City Council since 2012, working tirelessly to support measures that have improved City government, and the quality of life for all Culver City residents. A partial list of her many achievements includes the creation of a Finance Advisory Committee and expanded financial transparency, improving traffic and safety around schools, protecting the City’s billboard ban, saving vital homeless and rental assistance programs, ensuring continued funding for the arts, leading water conservation and sustainability efforts, voting to create a municipal fiber network for Culver City businesses and schools, championing affordable housing, and banning single-use plastic bags.

Meghan has already received the endorsement of the entire City Council, Congresswoman Karen Bass, the Sierra Club, several Culver City School Board members, and has gained strong support from the community at-large.

“We support Meghan with great confidence. She’s smart, honest and hard working, and has good judgment about the short and long-term needs of our community. She’s been an asset to the Council and we’re so happy she’s running again,” said event host Bonnie Seeberger.

Meghan served as Mayor of Culver City in 2014-2015, and participated in the national Mayor’s Challenge for Safer People Safer Streets (USDOT) initiative. She currently chairs the City Council’s Sustainability Sub-Committee and School Board & City Council Liaison Committee. Sahli-Wells is a Board Director on the Exposition Line Construction Authority, Co-Founder of the Culver City Bicycle Coalition, and a trained member of the Culver City Community Emergency Response Team. In addition, she represents the Westside Cities Council of Governments on a regional Energy and Environment Policy Committee, and serves as a member of both the Inglewood Oil Field Community Advisory Panel and Culver City’s Oil Drilling Sub-Committee.

Meghan is passionate about public service and believes the City Council has a responsibility to protect and promote the quality of life in Culver City, support efforts that are both environmentally and economically sustainable, invest in the future, and care deeply about our City’s residents. She is known for her hard-working, hands-on approach, her ability to collaborate and find common ground, and her willingness to listen to and respect the opinions of all Culver City residents. She looks forward to meeting and hearing from voters at the launch event on December 5th.