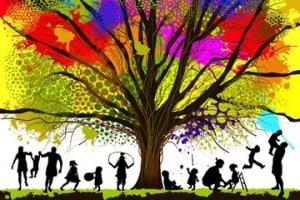 Alex King, noted Culver City genealogist, thinks Thanksgiving is a blessing for ardent ancestry buffs because everyone at the turkey table will be loaded with their own tidbits of information from the fraternal tree.

“Does anyone have a birth wall? he asked a dozen family history buffs at the Culver City Historical Society’s Conversation Series event on Sunday. “Some person whose information has just dried up and you can’t find any path to find out more about them?”
Several hands went up and shared impasses like a grandfather who immigrated from Russia to Canada then snuck into the U.S. at 16 riding a railroad car, and whose name got changed somewhere along the way.
“Canada is a dead end,” volunteered a veteran researcher, who had his own blockages from relatives who lived and disappeared there.
King had suggestions for goldmines, places where accumulated information has been stored and is available either free, or for a fee.
“Things have changed a lot since I started 30 years ago,” he said. “There are lots more places to research, and thanks to digital, more records have been scanned and are available to find information, but fewer are free.”
“I’ve gone back to 800,” said a skeptical-looking woman. “Is that possible and how much can I trust the information?”
“Oddly,” King explained, “while there are billions of us on the planet now, as you go back, there are fewer and the possibilities, instead of decreasing, actually increase because there were so few inhabitants. The possibility of finding a relative from 800 is better than you might think.”
In what could be good news for some, he said the probability that we are all carry royal blood is excellent.
“The royals had the best food, medical care and living conditions,” he said. “They were looked after and so escaped the plagues and diseases that decimated the poor. They survived, and so became our ancestors.”
As for Thanksgiving, he says it is an excellent chance to give family members lineage papers to fill out, encouraging conversation, memory sharing and possibly producing a gold nugget that could be the gate through your birth wall. Have family photos to jog memories and family recipies to spark discussion, put heirlooms in a box and have them identified and discussed. “Even a nickname could be a lead to a new person or breakthrough on a known one,” King said.
The knowledgeable and experienced crowd had suggestions of its own, including not trusting the information given when records are found. Hope Parrish said she has been stymied by her ancestry since the family comes from a volatile area of Eastern Europe that has changed hands repeatedly so that her grandmother had three nationalities without actually moving.
“Sometimes you have to read the whole thing,” advised Hope Parrish. “I found one relative 50 pages into a document that didn’t show the on the first page section.”
For those intrigued by their roots, following their winding trails can be boosted by DNA testing, which will link you to the ethnicity of your ancestors by matching markers. This will tell you probable surnames, the earliest known ancestor and the location where ancestors came from and moved to. All that opens new areas of potential records, from city directories to telephone books to the Internet.
The standard research tools include birth, marriage, death, divorce, immigration, voter registration, census and school records, family Bibles, obituaries and simply walking around known sites looking for anyone who remembers your relative or anyone who knows anyone who remembers anything about them. The smallest fact can open new vistas of information. Walking through cemeteries is time-honored, but increasingly small cemeteries are not kept up and are disappearing behind natural vegetation, concealing the crucial tombstone with your relative’s actual name, birth and death dates and other vital information. Ask locals about these and go searching through the bushes. King says funeral homes are often family businesses and keep records for long times. Ship records are valuable.
“Look for first names because last names were often changed,” he advised. Especially in family groups, sets of first names can be a great piece of your puzzle.”
Which brings you to Thanksgiving. Supply family group, family tree and generational chart forms and make them fill them out, King said. Encourage them to put down what they remember, true or not, where they heard it, the name of their source and contact information. “We all remember different things, and each thing is a piece of the puzzle,” he said.
Without recommending any one, he suggested FindMyPast.com as an excellent search engine for Commonwealth countries, Ancestry.com as the oldest with huge archives, MyHeritage.com and the Mormons archives, which are extensive, but may require a trip to Salt Lake City for detailed information.
“That’s what genealogy is, a big puzzle with you searching for the pieces,” he said. “With families widely scattered and getting together less these days, Thanksgiving can give you a lot of pieces, so go armed with forms and pens and get them to do your work for you.”