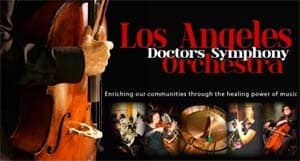 The Los Angeles Doctors Symphony Orchestra will present a reprise of its enormously popular concert, “An Afternoon at the Opera” with soprano Emma-Grace Dunbar. The concert will feature arias and overtures by Bizet, Charpentier, Donizetti, Handel, Rossini, Strauss, Saint Saëns and Verdi. The concert will take place on Sunday, November 22, 2015 at 3:00 p.m. at the Veterans Memorial Auditorium, 4117 Overland Avenue, Culver City, California. Admission: suggested donation of $10. Parking is free.

Emma-Grace Dunbar has performed with opera companies across the United States, including the San Diego Opera, Utah Festival Opera, and Ash Lawn Opera. Her roles include Kathie in The Student Prince, Servilia in La Clemenza di Tito, Mabel in Pirates of Penzance, Papagena in The Magic Flute, and Nella in Gianni Schicchi.

The Los Angeles Doctors Symphony Orchestra, founded in 1953, presents concerts in Culver City, West Hollywood, and Santa Monica in fulfillment of its mission of enriching Southern California communities with the healing power of music, supporting important medical causes, partnering with groups that support young musicians in their pursuit of the discipline and joys of musical expression, and providing musical growth and fellowship for its performing members. The orchestra has been led by Maestro Ivan Shulman since 1990.