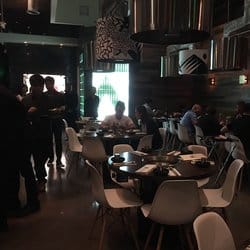 Our small patch of Los Angeles County called Culver City is not only home to, but known for upscale ethnic eateries from Argentinian to Brazilian, Cuban, Danish, Ethiopian, French, Generic chains, Hawaiian, Indian, Japanese and – phew, I got to K – a new Korean restaurant. We’ve had a couple of Korean places in the past, but they all went out quickly, like thieves in the night. Unlike when I was growing up, and even into the early 90’s, authentic Korean food is now easy to get all over Los Angeles. But now we have Hanjip, just opened with fanfare and accolades. I couldn’t get near the place for a Sunday lunch, so I went back at the off hour of 3:45, for an early dinner before sunset, enabling me to bike home before dark.

I love all Asian food, prefer it to other cuisines whenever possible, and Korean is one of my favorites within the genre. So I was excited at the prospect of a new place within biking distance from my house. Hanjip is open all day every day, from 11:30am to midnight. Yay for places that are open late! I was so prepared to love the place, that it pains me to have to impart this less than satisfactory report.

This is a relatively small storefront, yet all of the tables are large format; there is no place to sit with fewer seats than four. There is an outside area that is a waiting pen only, not equipped for serving. Therefore, structurally, there will always be a wait during busy times, if this restaurant can even survive the competition of myriad other choices for food in Culver City and environs, and/or people’s ability to hop in their cars and get to K-town in fifteen minutes.

I was allowed to order from the lunch menu until 4pm, so I quickly decided on the spicy beef noodle soup. Excuse the lack of proper Korean food terminology in these next sentences – I’m not looking to be “all that” about this review, I’m just giving a blow-by-blow hot off the golden (their specialty) grill. The typical small dishes brought to the table were tasty, but all kimchee’d out; there was no little thing of bean sprouts, or boiled greens with sesame, or clear noodles in soy, not even the low-end potato salad that is often boring but sometimes a good palate changer. The point is, there were no palate changers, so I ordered white rice to have with the Christmas-colored appetizers. The rice was undercooked; the morsels were hard around the edges.

Although I would give the restaurant the benefit of the doubt on this for being new, you must understand that I waited thirty minutes for that soup. I knew the time, because I had definitely come before 4PM, and I knew that sunset was coming at 4:54. When the soup finally arrived, I had a chance to take a few sips of the red, yet bland, broth, then package it up and totter it home on my bike. The meat was stringy brisket, and there were some veggies, but hardly any “noodles” at all – it might’ve been a mistranslation, but there were only a few strands of glass noodles. Usually, if you are ordering “noodle soup” throughout most of Asia, you’d get some egg or rice or wheat noodles in the dish, not just the glass ones. Maybe I’m not as familiar with Korean cuisine as I’d thought, but I imagine other customers, lower on the knowledgeability rank than even me, may have a similar complaint.

The food other people ordered looked good enough; presumably high quality raw meats, vegetables, and shrimp were marched by me, but, mind you, these foods are not prepared. Given the proper equipment, anybody can do it. They do have prepared items on the menu, but if they are as tasteless as the soup, I’m not interested anymore. The meat is cooked, in de rigueur fashion, on their “famous” golden grills by the staff, in front of you, like a mini-Benihana at the table.

The waiter then presented me with the bill, $14 for the soup, to which they pre-added a 20% tip! He was appropriately apologetic about this, not only knowing that for the wait I might have left less, but clearly because, in the short time since they’d opened, he’d been receiving other negative feedback about it. It was hard to understand what the waiter was saying, and hard to get the attention of the staff as well, what with loud music, high ceilings and sizzle of the grills – not a place for intimate conversation. But I must rant about this tip business. It would have been preferable for Hanjip to have higher prices, but tell customers NOT to tip the wait staff, making it like how things are in Japan. But the trend of lobbing hidden charges onto a bill after you’ve sat down, ordered and eaten is downright despicable. In San Francisco, some restaurants have begun to charge 3% – 3%, can you imagine? – for “health care for employees…I can write 1000 words alone on how and why I find that practice so objectionably heinous. And, just as we’re now charged for recyclable paper bags (not just the plastic ones) because they got away with it in San Francisco, please let us unite against such trends continuing here!

For this reason alone, I will never, ever, set foot in Hanjip again, unless somebody tells me they’ve discontinued this unconscionable practice. There are soooooo many nearby choices for Korean food here in LA, we can go on living without Korean food within our Culver City borders if we must. We have lived without a deli, since the death of Roll ‘n Rye, and we really don’t have much Chinese cuisine to choose from here either. With all of our food choices here in Culver City, high expectations rule the day.