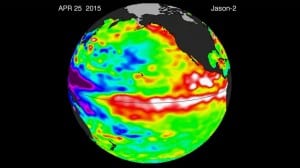 Every two to seven years, an unusually warm pool of water—sometimes 4 to 5 degrees Fahrenheit higher than normal—develops across the eastern tropical Pacific Ocean to create a natural short-term climate change event. This warm condition, known as El Niño, affects the local aquatic environment, but also spurs extreme weather patterns around the world, from flooding in California to droughts in Australia. This winter, the 2015-16 El Niño event will be better observed from space than any previous El Niño.

This year’s El Niño is already strong and appears likely to equal the event of 1997-98, the strongest El Niño on record, according to the World Meteorological Organization. All 19 of NASA’s current orbiting Earth-observing missions were launched after 1997. In the past two decades, NASA has made tremendous progress in gathering and analyzing data that help researchers understand more about the mechanics and global impacts of El Niño.

“El Niño is a fascinating phenomenon because it has such far-reaching and diverse impacts. The fact that fires in Indonesia are linked with circulation patterns that influence rainfall over the United States shows how complex and interconnected the Earth system is,” said Lesley Ott, research meteorologist at NASA’s Goddard Space Flight Center, Greenbelt, Maryland.

Using NASA satellite observations in tandem with supercomputer processing power for modeling systems, scientists have a comprehensive suite of tools to analyze El Niño events and their global impacts as never before. Throughout this winter, NASA will share the latest scientific insights and imagery updates related to El Niño.

For instance, scientists are learning how El Niño affects the year-to-year variability for fire seasons in the western United States, Amazon and Indonesia. El Niño may also affect the yearly variability of the ground-level pollutant ozone that severely affects human health. Researchers will be keenly focused on how the current El Niño will affect the drought in California.

“We still have a lot to learn about these connections, and NASA’s suite of satellites will help us understand these processes in a new and deeper way,” said Ott.

NASA satellites also help scientists see the global impact of El Niño. The warmer than normal eastern Pacific Ocean has far-reaching effects worldwide. These events spur disasters, such as fires and floods. They change storm tracks, cloud cover and other weather patterns, and they have devastating effects on fisheries and other industries.

NASA’s Earth-observing satellites help monitor those and other impacts by measuring land and ocean conditions that both influence and are affected by El Niño. For instance, NASA’s Global Precipitation Measurement mission provides worldwide precipitation measurements every three hours. NASA’s Soil Moisture Active Passive mission measures soil moisture in the top layer of land. Both of these satellites are useful for monitoring drought, improving flood warnings and watching crop and fishing industries.