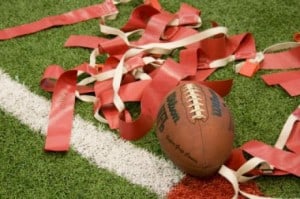 The Panthers got on the board early, as on the second play from scrimmage, tailback Brandon Zeidman took an option pitch from quarterback William Schultz for a 45 yard touchdown. After Elijah Adams converted the extra point, Culver City led 8-0.

After the Panther defense shut down Vista on four plays, Culver City scored on its first offensive play as wide receiver David Lee ran 33 yards for a touchdown. After the conversion point, Culver City led 16-0.

Middle linebacker Thomas Chee expertly read Vista’s first offensive play and put himself in position to intercept the pass and took the ball into the end zone for a 33 yard pick-6. Quarterback Schultz connected with guard Getu Whitney for the extra point, extending Culver City’s lead to 23-0.

Vista got on the board with a 55 yard drive, cutting the Culver City lead to 23-8, but Vista rally was quashed moments later as the Panthers put together a long drive, led by a 20-yard reverse by Maya Zee and a 41-yard highlight worthy run by tailback Royce Williams. The Panthers scored the game’s final touchdown on a two-yard quarterback keeper by William Schultz.

The Panthers face undefeated The City school of West Los Angeles on Friday at 4:00 pm at Culver City in what amounts to the Super Bowl of Westside 6th grade flag football.