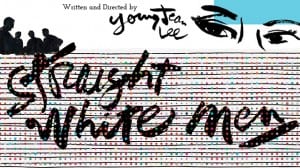 Young Jean Lee’s “Straight White Men,” will have its West Coast premiere November 20 – December 20, 2015, at the Center Theatre Group/Kirk Douglas Theatre, directed by Lee and presented in collaboration with the Center for the Art of Performance at UCLA.
The first U.S. performances of the play since The Public Theater presented its New York premiere last fall will feature a cast of Frank Boyd, Richard Riehle, Brian Slaten and Gary Wilmes.
“Straight White Men” features scenic design by David Evans Morris, costume design by Enver Chakartash, lighting design by Christopher Kuhl, sound design by Chris Giarmo and Jamie McElhinney and movement by Faye Driscoll. Mike Farry serves as dramaturg.
In “Straight White Men,” Young Jean Lee offers a traditionally structured take on the classic American father-son drama. Ed (played by Riehle) and his three adult sons come together to celebrate Christmas. They enjoy cheerful trash-talking, pranks and takeout Chinese, but find themselves confronting a problem that even being a happy family can’t solve: when identity matters, and privilege is problematic, what is the value of being a straight white man?