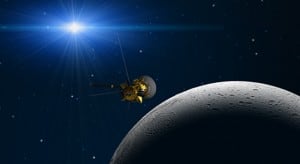 NASA’s Cassini spacecraft has begun returning its best-ever views of the northern extremes of Saturn’s icy, ocean-bearing moon Enceladus. The spacecraft obtained the images during its Oct. 14 flyby, passing 1,142 miles above the moon’s surface.

Scientists expected the north polar region of Enceladus to be heavily cratered, based on low-resolution images from the Voyager mission, but the new high-resolution Cassini images show a landscape of stark contrasts. “The northern regions are crisscrossed by a spidery network of gossamer-thin cracks that slice through the craters,” said Paul Helfenstein, a member of the Cassini imaging team at Cornell University, Ithaca, New York. “These thin cracks are ubiquitous on Enceladus, and now we see that they extend across the northern terrains as well.”

Cassini’s next encounter with Enceladus is planned for Oct. 28, when the spacecraft will come within 30 miles of the moon’s south polar region. During the encounter, Cassini will make its deepest-ever dive through the moon’s plume of icy spray, sampling the chemistry of the extraterrestrial ocean beneath the ice. Mission scientists are hopeful data from that flyby will provide evidence of how much hydrothermal activity is occurring in the moon’s ocean, along with more detailed insights about the ocean’s chemistry—both of which relate to the potential habitability of Enceladus.

Cassini’s final close Enceladus flyby will take place on Dec. 19, when the spacecraft will measure the amount of heat coming from the moon’s interior. The flyby will be at an altitude of 3,106 miles.

A COSMIC SACKFUL OF BLACK COAL. Dark smudges almost block out a rich star field in this

new image captured by the Wide Field Imager camera, installed on the MPG/ESO 2.2-meter telescope at ESO’s La Silla Observatory in Chile. The inky areas are small parts of a huge dark nebula known as the Coalsack, one of the most prominent objects of its kind visible to the unaided eye. Millions of years from now, chunks of the Coalsack will ignite, rather like its fossil fuel namesake, with the glow of many young stars.

The Coalsack Nebula (en.wikipedia.org/wiki/Coalsack_Nebula) is located about 600 light-years away in the constellation of Crux (en.wikipedia.org/wiki/Crux — The Southern Cross). This huge, dusky object forms a conspicuous silhouette against the bright, starry band of the Milky Way and for this reason the nebula has been known to people in the southern hemisphere for as long as our species has existed.

The Spanish explorer Vicente Yáñez Pinzón first reported the existence of the Coalsack Nebula to Europe in 1499. The Coalsack later garnered the nickname of the Black Magellanic Cloud, a play on its dark appearance compared to the bright glow of the two Magellanic Clouds (en.wikipedia.org/wiki/Magellanic_Clouds), which are in fact satellite galaxies of the Milky Way. These two bright galaxies are clearly visible in the southern sky and came to the attention of Europeans during Ferdinand Magellan’s explorations in the 16th century. However, the Coalsack is not a galaxy. Like other dark nebulae, it is actually an interstellar cloud of dust so thick that it prevents most of the background starlight from reaching observers.