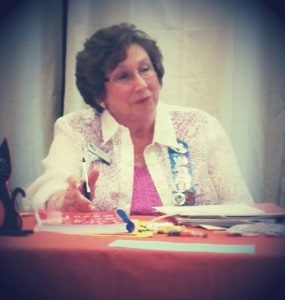 A teacher of 30 years, educated, savvy, worldly and alone, received a phone call from a man who declared himself a lawyer from Costa Rica. He said he needed help to represent her grandson, who was in trouble.

Fortunately, she told a friend about this tragedy, she said she was having her daughter drive her to the bank to get money to help her grandson.
The friend contacted the daughter. The grandson was contacted: alive, well and more than concerned about his relative’s narrow escape from a heartless scammer.

These bottom feeders target older, single victims, the kind who don’t have anyone to check with and who are often all too willing to talk to a friendly voice about their family, finances and lives.
Marcia Willett, (pictured above) Chair of the Home Life arm of the California Federation of Women’s Clubs, said this growing scenario is so pervasive that Consumer Reports dedicated its recent issue to the daylight robbery of lonely, vulnerable and well-heeled seniors in a cover story called A Crying Shame.
“They play on your soft heart,” she said. “You don’t want bad things to happen to your family.” It’s easy enough to check them out, just call the person who is supposedly in trouble. Or someone close to them. If they’re in trouble, people will know it.
“Be alert, it could happen to your neighbors, your coworkers, family members, club members, gym or workout buddy,” she told the Culver City Women’s Club Monday, “people who don’t have anyone to go to to ask if something seems legitimate, or if their suspicions are valid.”
A man gets a phone call from another man saying he is a police officer asking for donations for officers and their families injured on the job. A woman gets an email from a man dressed as a firefighter who is looking for donations for homeless children injured in fires.
“They play on your heartstrings,” Willett said. “We were brought up to be polite on the phone and to trust people. These make us easy marks for these hard hearted scammers.”
One of the major scams is to follow a natural or social disaster with appeals for money to help the victims. “These come out of the woodwork after major disasters like Katrina,” she said.
To get money to needful victims without becoming one yourself, check out the legitimacy of any charity that approaches you at charitynavigator.com or guidestar.org.
Fill out a fraud complaint at the post office if you get unsolicited mail asking for money for causes you’ve never heard of, or promising an impossible 50% interest on your investments.
Ask any suspicious caller for a brick and mortar address; scammers use post office boxes. Demand a real phone number you can call back. If they won’t give one, hang up and report them. If they give you one, call the number. If you get an automated response, hang up and report them.
Immediately contact your friends or club members or gym buddies and warn them of the scam activity. Neither the IRS nor Jury Duty officers will ever call you. Should you get a call from one of these, report them to the Federal Trade Commission at [email protected] and the California Attorney General at oag.ca.gov.
A scam back east called woodchucking involves tree trimmers. Scammers will do down a block where a crew is working and tell neighbors they are with that crew and you could be next. They collect a deposit and never return. The worst part is if someone falls for it, they go on a list, so they will be scammed again and again. Be sure to tell scammers before you hang up that you are reporting them, they will definitely not put you on a contact list.
“When they tell you not to tell anyone, that’s a big shoutout that you’re talking to scammers,” Willett said. “ They will say someone you know needs help, or they represent a trusted group like firefighters… charities can make appeals that break your heart, but 90 percent of the money will go to salaries and ‘expenses,’ not the victims.”
If you are suspicious at all, write down the phone number, the name they are using, the organization or contacts and ask for information to be sent to you…get as much as you can to report to the fraud examiners. You could save others from losing their life savings and facing life without their retirement resources simply because they have a kind heart.