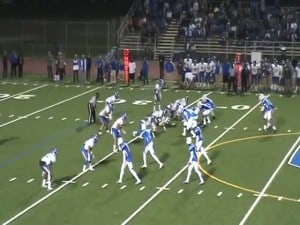 This week, our Centaurs opened up Ocean league play hosting the Lawndale Cardinals. The Cardinals came in at 4-1, with 4 straight wins. The Centaurs came in at 2-2, with two and a row having beaten University high at home two weeks ago, and on the road at Channel Islands last week.

The Cardinals won the toss and deferred. Culver City moved the ball well on their opening drive with a 16 yard gain through the air to #15, senior wide receiver Kyle Johnson. #7, sophomore QB Jonathan Martin, also had a nice 5 yard keeper. The drive ended with a missed 35 yard Field goal by Anthony Lopez. The Centaurs come away empty, however, showing an active offense.

On Lawndale’s opening drive, #12 senior quarterback Chris Murray is immediately sacked for a small loss. Then, Murray takes off for a 39 yard gain. This was the result of both good moves and some bad tackling by Culver City. Long gains were then nullified by Lawndale holding penalties, only to see a handoff to #21, Lawndale senior half-back, Bryant Perkinson, go for 18 yards down to the Culver City 36 yard line. #3, senior running back Zach Cooper brings the ball to the 22. A misdirection play by QB Murray, first faking to the tailback, and then taking off for a 22 yard run for the touchdown. Lawndale goes 80 yards on eight plays to take a 7-0 lead.

The centaur’s next possession does yield a first down, but is soon forced to punt, following, a personal foul on the Cardinals sends them back to their own 10 yard line to start their second possession. Lawndale, while playing well, continues to hinder their own progress with penalties.

The Cardinals start with the small gain, then are the beneficiaries of a face mask penalty against Culver City. The second quarter starts with Perkinson rushing for 12, the stop made by Culver City senior linebacker, Aldo Soriano. A couple of strong runs for Lawndale have them downfield in a hurry. A key stop made by Culver City’s #3, junior defensive back Mekhi Ware. Ware also leads the nation with 9 interceptions. Lawndale gets a good gain on the ground followed by a 2 yard QB keeper for the touchdown. The point after is good, and at 9:41 left in the second. The Cardinals widen their margin to 14-0.

Culver City Felt the pressure on their next possession with Martin keeping the ball for 5 and then handing off to #6, senior running back Cahill Hooper for 14 more. A beautiful 46 yard touchdown pass to Kyle Johnson gets the centaurs on the board with a quick strike. 71 yards in 4 plays. The Centaurs trim the lead to 14-7. Kyle’s 6’3” frame came in handy on that score, as it does when Kyle shows his cross sport ability, also playing varsity basketball for the school.

Another holding penalty on the Cardinals stifles their offense for the first time in the game.

Culver City gets the ball back with under 5 minutes in the second quarter. QB Jonathan Martin hits #2, senior Mason Mulvihill for a first down, then connecting with #3 Mekhi Ware at midfield to move the chains again. A pass to #1, sophomore wide receiver Tye’ler Grant-Brown for 9 yards and another to Kyle Johnson for 24. Finally the 17 yard touchdown pass to Mason Mulvihill. With 3:40 left in the half, the Centaurs knot the game up at 14-14. Jonathan Martin was 5 out of 5 for 79 yards on the drive.

The Cardinals soon have a big pickup to their 35, and on the ensuing third down, are able to net 32 yards for another first down. A 14 yard gain by Lawndale sets up the go ahead touchdown for Perkinson with 1:13 left in the half. Lawndale 21, Culver City 14.

The second half had both teams continuing to battle. Scores by each side brought the game to 28 – 21, Lawndale, and up to 41-21 on a Murray touchdown keeper.

Culver City got back into gear culminating with a 10 yard TD from Martin to #12, junior wide receiver, Deven Osborne. No point after closes the game to 41-27, Lawndale.

With 11:07 left in the 4th quarter, Culver City is unable to recover their onside kick. With a short field, Lawndale scores and increases their lead to 48–27.

The penalties showed up again for the Cardinals as two holds leave them in a position to go on fourth down where Culver City’s #9 defensive back, junior defensive back intercepts Murray.

Martin starts with a gain of 17 to Mulvihill. A no gain and incomplete pass is saved by #4 Poindexter rushing the ball down to the Lawndale 10 yard line. A pass interference penalty against Lawndale sets up Kyle Johnson for the touchdown. 48-41 Lawndale, with 1:39 left to play in the game.

A second onside kick attempt by Culver City is fielded cleanly by the Cardinals.

The bottom line is, that after giving up two, fairly easy touchdowns in the first quarter, the Centaurs regrouped and found a way to stay in the ballgame. The entire team, led by Martin, Mulvihill and Johnson, stepped up to face the challenge, to fall a little short. This bodes well for Culver City and a great deal of positive points can be taken away from this game.