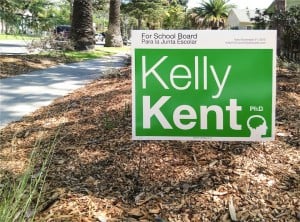 “How wonderful that our County Democratic Party agrees with our local Club…Kelly is an exceptionally capable candidate…the Board will flourish with her on it,” said Ms. Goldberg, who is retiring from the School Board this year. Ms. Goldberg, a former CCUSD English and history teacher, has served the Culver City School District for nearly 50 years.

Ms. Goldberg joins many past and present elected officials in supporting Dr. Kent, including Scott Zeidman, a former CCUSD School Board President and the current chair of the Culver City Parks & Rec Commission. Zeidman has been serving side-by-side in this capacity with Dr. Kent for the past year.

Mr. Zeidman’s support of Dr. Kent demonstrates that Dr. Kent is adept at crossing the political divide and can collaborate and be productive on a team with four colleagues.

“Within two meetings,” Commissioner Zeidman said, “Kelly proved to be so intelligent, so understanding, so energetic that it really did not matter where she came from. It just meant she had the right ideas. She has done an incredible job.”