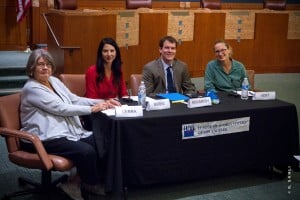 “This is an experiment,” was the statement that moderator Julie Lugo Cerra offered at several points of the program at City Hall on October 1, 2015. The format of the League of Women Voters School Board Candidates Forum was very flexible; each of the three candidates, Anne Burke, Scott McVarish and Kelly Kent, were given 20 minutes to answer questions, their own personal timekeeper, and a presentation of topics rather than specific questions.

What was clear from the beginning is that there are three highly educated candidates standing for the school board. With a J.D., a Ph.D. and a double Masters, there was no one on the panel who would not be setting a high standard – as well as modeling what academic success can look like- for the students in the district.

Anne Burke introduced her self with her volunteer credentials, including being named at the See’s Candy Volunteer of the Year in 2011. Two Master’s Degrees, one from Northridge and one from Loyola Marymount, and her long experience with the El Marino PTA recommended her as a very prepared candidate.

Scott McVarish noted his professional background as a lawyer who has worked with various districts for 10 years. His online series “For Great Schools” (some of which has run on Culver City Crossroads.com)  interviews sitting members of the school board. McVarish noted the “the central job of the school board is really to supervise the school superintendent, and happily, we have a really good one.”

Kelly Kent candidly offered that she moved here to Culver City for the schools. A doctor of neurobiology, she originally pursued research. After turning her considerable skills to teaching at Antioch University and Moorpark College, she stated “teaching is something I’m passionate about”  and promised to focus on improving the curriculum at the schools.

It was noted by McVarish that the school board coming into office would have a much easier time than the board that was seated four years ago.  “When we were facing such a budget crisis, and the whole focus was on what could be cut…Now, we have this bond money and the choices that this incoming board makes will affect the schools and the community for many decades to come.”

While discussing the need for parental involvement (one of Burke’s areas of strength,) the infrastructure and budgeting matters (one of McVarish’s points of expertise,)  and innovating the classroom for the optimal student experience (one of Kent’s well-researched passions) each one of the articulate candidates brought out a wealth of detail to support their perspectives.

There was, as to be expected, jockeying for position.  When Kent called for “a diversity of voices on the board,” McVarish said that he was the only “Spanish speaker” available to non-English speaking parents, and Burke upped the anti by identifying herself as the “only non-white” candidate.

Since first announcing their candidacy, Burke and McVarish have run as a team. This has left Kent to show how well she will be able to work with the rest of the board. She offered her services on the Parks & Recreation Commission as her example of team spirit, and said that “creating the Spanish language program at Lin Howe required a lot of cooperation with a very diverse group of teachers, parents, students and volunteers.”

Opening the format so that the school board hopefuls had an opportunity to expound at length about the topics that were most important to them gave the information a great deal of depth and nuance. With several weeks still ahead before voters go to the polls,  there are more candidate forums ahead. Whatever the experiment set out to prove, it succeeded in giving the school board race an evening of priorities, perspectives and personalites.

The LWV school board forum will be replayed on Channel 35. Check with the city for times.