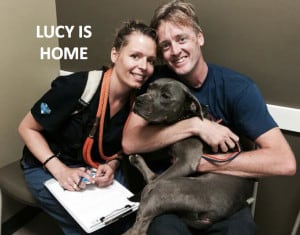 After a grueling three-week search, aided by hundreds of volunteers on the ground throughout southern California, as well as by supporters all over the world, Dr. Antje Hinz and her partner, Finn Egan, were overjoyed to share the wonderful news that Lucy Hinz-Egan, Dr. Hinz’ service dog, who vanished on September 7, had been found alive. Lucy’s popular Facebook page, created by Dr. Hinz, a breast cancer survivor, and Egan, which once was stated “Lucy Hinz-Egan Is Lost”, and was where her extended family exchanged information and coordinated search efforts, now happily displays a new cover photo, stating “LUCY IS HOME.” Little Lucy is now snuggling once again in the arms of her family. This sweet, loving dog must have had an angel looking out for her, one who guided her back to her family, late in the afternoon on September 28. The search for Lucy, who slipped under a fence at the Pen Mar Golf Course, while her people were out of town, was first reported here.

Shortly after that report was released, KNBC picked up the story, and help started flooding in from friends, strangers, locals, people all across the country, putting boots on the ground, posting flyers, going door to door, attending events to raise awareness, doing anything to bring Lucy home. That evening, at 8 p.m., this Examiner received an amazing Facebook message from a Team Lucy member, who had been working day and night to help find Lucy, that simply read, “OMG OMG…. Sighting.” Hinz and Egan are very private people, and want to focus most of their energies on all the good things that took place, and thank all the wonderful people who volunteered their time and energy to help lead them to Lucy. However, though the search ended gloriously, it quickly became evident that soft-hearted Lucy had endured a terrible 21 days, suffering horrific abuse while she was missing.

The dark side to Lucy’s journey must be exposed, and on October 2, after much discussion, her family allowed KNBC to release an updated report about their girl’s current physical condition. They hope that by revealing the details of what happened to her, that the disappearances of family pets from Venice, where she disappeared, all the way to Culver City, nine miles away, where she was located, will be more thoroughly investigated. In the news report, and according to Dr. Hinz and Dr. Tina Son, Lucy’s critical care specialist, somebody purposely fractured and partially removed at least 11 of Lucy’s upper teeth and one of her lower canines. In the words of Dr. Hinz, her mouth “looks as if someone took a buzzsaw to it, and sliced her teeth down to her gumline.” She’s got a deep scar around her muzzle and lower lips, as if her mouth was forced open to more easily smash her teeth off, and then wired shut so that she wouldn’t be able to defend herself.

This torture could only have been done by human hands; she wasn’t eating rocks or chewing on wood to survive. As a veterinarian, Dr. Hinz has seen many dogs with broken teeth, usually dogs much older than Lucy, whose teeth have deteriorated from age or lack of care or proper nutrition. This was no accident. Lucy was mutilated, most probably by dogfighters. She has such a kind nature, it’s almost certain that she would have been thrown into a dogfighting ring, used as bait, and ripped to shreds in a matter of moments. She lost at least 15 pounds in the three weeks she was missing from her home in Venice. Due to her missing teeth, Hinz explains that Lucy will have to eat soft food for the rest of her life. She does have one right lower canine, but walks around smacking her lips together, as if she’s uncomfortable; it’s obvious she knows that something awful happened to her. According to Dr. Son, she will need a series of root canals and must have the 11 fractured teeth removed from her disfigured mouth; she may need even more teeth removed after that. Dr. Son will make that determination. Based on Lucy’s current condition, and other reports, it is believed that dogfighting rings are operating in those areas.

Mehaul O’Leary, the Mayor of Culver City was on a plane when he received the horrifying details about the abuse Lucy suffered, and he, in turn, provided those details to the Culver City Chief of Police, Scott Bixby. It is expected that this information will be utilized by the authorities to investigate the areas in which Lucy was both seen and finally recovered. According to Egan, it was a ‘perfect storm of events’ that led him to Lucy.

A member of Team Lucy received a message that a dog wearing Lucy’s distinctive collar had appeared in her backyard. The woman typed a search on Craigslist and came up with Lucy’s information, notifying a member of Team Lucy from the Westside Pet Clinic, but by then Lucy had run off again. A volunteer from the Amanda Foundation, who was also part of Team Lucy, was in the area and spied Lucy, but was unable to catch her. She knew it was Lucy, and told Finn, “I’m looking at her!”

Finn hopped in his car and started driving to the Culver City area, letting Antje and Team Lucy know what was going on. They split up into teams, and went in different directions. He told Examiner, he climbed fences, jumped on top of roofs to get a better look at the areas, Finn searched for her for two hours that day, calling her name over and over. He went down side streets, walked near busy highways and under overpasses. Then he spied a street that he had not crossed. He kept calling, “Lucy, Lucy…” He said that she finally peeked her head around a pole, he called her name, and she ran into his arms.

Throughout the search, there were many differing opinions and suggestions on how to best locate Lucy and bring her home. As the days passed, Lucy sightings had stopped. Many searchers believed Lucy was being held by someone. Finn and Antje continued to pursue leads,  following up messages from people willing to provide them with concrete information.

However the planets aligned to bring her home, Lucy, the beloved, soft-hearted pitbull, was fortunate to be found alive. Scared, hungry, battered, tortured, but alive. Antje says that “she’s still sweet, and very happy to be home.” Finn would like to use the experience he gained in his search for Lucy to make it easier for other people to know what to do should they find themselves in a similar situation. He is considering setting up a website to provide people with accurate, useful information, so they can avoid the frustrations he faced in his search for his missing girl, including how to easily create PDF posters and flyers. There are other pets which have mysteriously disappeared from this area. Since the search for Lucy began, some of these animals have been reunited with their families. But authorities across the country need continuing help from the public to expose dogfighting rings. If you see something, say something.