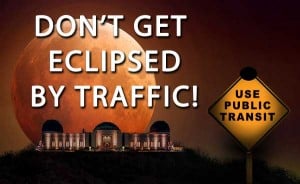 MOONLIGHT AND MUSIC MERGE AS GRIFFITH OBSERVATORY HOSTS LUNAR ECLIPSE SUNDAY, SEPT. 27. Griffith Observatory will host a free public event to view the total lunar eclipse on Sunday, Sept. 27, from 6:45 p.m. to 9:45 p.m. Telescope and binocular viewing of the Moon will be available free to the public, with commentary by Griffith Observatory staff members. During parts of the evening, the L.A. Philharmonic and Steinway & Sons will present live piano music performed by Ray Ushikubo of the Colburn School. He will perform Beethoven’s “Moonlight Sonata” and other Moon-related pieces on the Observatory’s front lawn. Blankets are welcome, chairs are prohibited.

People can safely view the eclipse from anywhere and don’t need a telescope or other viewing device. Just look near the horizon to the east, beginning just after sunset. (Although the dim eclipsed Moon rises at about 6:45 p.m. PDT, it may be somewhat hard to see until after dark, around 7:30.)

A total lunar eclipse occurs when the Moon passes into the shadow cast by the Earth. The round disk of the full Moon slowly moves in to the dark shadow, and the bright Moon grows dim. The Moon, however, does not become completely dark. Instead, it usually glows with a faint copper or red color, a result of sunlight being filtered through the Earth’s atmosphere.

have scientists stunned—not only for their breathtaking views of Pluto’s majestic icy mountains, streams of frozen nitrogen and haunting low-lying hazes, but also for their strangely familiar, arctic look.

A new view of Pluto’s crescent—taken by New Horizons’ wide-angle Ralph/Multispectral Visual Imaging Camera (MVIC) on July 14 and downlinked to Earth on Sept. 13—offers an oblique look across Plutonian landscapes with dramatic backlighting from the Sun. It spectacularly highlights Pluto’s varied terrains and extended atmosphere. The scene measures 780 miles across.

“This image really makes you feel you are there, at Pluto, surveying the landscape for yourself,” said New Horizons Principal Investigator Alan Stern, of the Southwest Research Institute, Boulder, Colorado. “But this image is also a scientific bonanza, revealing new details about Pluto’s atmosphere, mountains, glaciers and plains.”

Owing to its favorable backlighting and high resolution, the MVIC image also reveals new details of hazes throughout Pluto’s tenuous but extended nitrogen atmosphere. The image shows more than a dozen thin haze layers extending from near the ground to at least 60 miles above the surface. In addition, the image reveals at least one bank of fog-like, low-lying haze illuminated by the setting Sun against Pluto’s dark side, raked by shadows from nearby mountains.

Combined with other recently downloaded pictures, this new image also provides evidence for a remarkably Earth-like “hydrological” cycle on Pluto — but involving soft and exotic ices, including nitrogen, rather than water ice.

Bright areas east of the vast icy plain informally named Sputnik Planum appear to have been blanketed by these ices, which may have evaporated from the surface of Sputnik and then been redeposited to the east. The new Ralph imager panorama also reveals glaciers flowing back into Sputnik Planum from this blanketed region; these features are similar to the frozen streams on the margins of ice caps on Greenland and Antarctica.

“We did not expect to find hints of a nitrogen-based glacial cycle on Pluto operating in the frigid conditions of the outer solar system,” said Alan Howard, a member of the mission’s Geology, Geophysics and Imaging team from the University of Virginia, Charlottesville.”

“Pluto is surprisingly Earth-like in this regard,” added Stern, “and no one predicted it.”