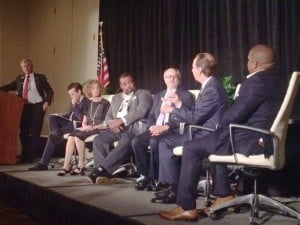 The Culver City Chamber of Commerce is always concerned with business, so when the title of “Crossroads of Technology and Creativity” was offered for a panel at a recent luncheon on Sept. 17, 2015, it seemed to be opening a door to a bigger perspective. In the 21st Century in Culver City, creativity and technology are as essential ingredients for business, and more attention would certainly bring broad benefits.

The room at the DoubleTree Hilton was unusually crowded, clearly indicative of the level of interest in the topic. The panel called to address the crowd represented some Culver City businesses that live and breathe on the reach of technology.

While much was said about the speed with which business is changing via the digital revolution, the conversation circled around time and again to the real treasure that Culver City has to offer – proximity. Guren spoke glowingly of the shift in the Hayden Tract that turned anachronistic industrial space in to creative office space, “and then we have people working in the related businesses who can run into other people crossing the street, or going out to lunch.”

Campbell rang a similar chord with his comments, that the pedestrian traffic and popular eateries made Culver City a place where “it’s just easy to cross paths with someone whose ideas may spark something new in your own thoughts.”

While there was much talk of how-to-reach-the-millenials ( a demographic notably absent at Chamber functions) and a tendency to speak about rather than to the creative culture, the panel did well as emeritus commentators on the massive shift that the digital revolution fostered.  All seemed to be looking forward to the next development, and that was where the spotlight came to a stop.

No one garnered more attention than Nachbar when he brought out the plans for the dedicated high speed Internet project that the City has in the works. Hailed as unique, giving the businesses  and the schools of Culver City an almost quantum leap in digital processing, the much anticipated high speed cable will almost certainly foster even more demand for addresses in Culver City.

Nolan made a number of jokes acknowledging his status as a local new anchor made him an endangered species in this landscape. How many people in the room still watched local news on television was understood to be in the low two digits, but his affable manner and ease in facilitating was a key part of the success of the event.

The last question lingering over the panel reflected on how to connect the local with the digital.  I smiled to myself and thought, well, when you call it a crossroads, that’s the place where these things happen.