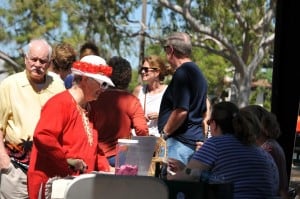 Culver City’s Historical Society celebrated the city’s 98th birthday last Sunday, September 20, 2015 by declaring its annual get-together/fundraiser the first Founder’s Day Picnic and officially starting the one-year countdown to the grand opening of its Centennial Year on September 24, 2016.
Planning how the city can suitably celebrate a century of growth has occupied the society and city for more than a year.
“In just two weeks of fundraising, we’ve raised more than $20,000 of our goal of $100,000,” said Jim Clarke, president of the City of Culver City Centennial Committee, or CCCCC, “businesses have been eager to support this.” Funds will pay for street light banners, promotions, the website, advertising and other expenses. Other fundraisers may include donor bricks, t-shirts and medallions.
Plans are to pack a year of festivities with events focused on Culver City’s history. Clarke visited 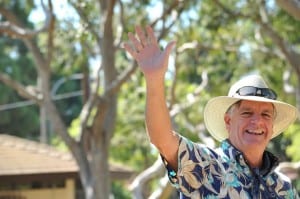 local groups over the past year to encourage them to choose an event or presentation to perform during the Centennial year. How Culver City became the Heart of Screenland, a foodie mecca, Silicon Valley South or have the most awkward boundary lines of any city its size could be covered. Annual events can be grandfathered into the celebration. The car show could feature 1917 cars, he said. The Culver City Women’s Club is looking into Rachel Culver and her contributions to the creation of the city to feature at their annual ice cream social. Schools and Culver City special districts can take part.
During this run-up year to the Grand Opening, the 5C committee will approve activities and list them on a calendar on their new website, culvercity100.org. It was unveiled to committee members at their regular meeting Monday, and is expected to be up and running by the end of the month, according to committee member and webmaster Scott Wyant. It will be bare bones at the beginning, he said.
“There’s no sense building an elaborate calendar when all we have to put on it is the opening ceremonies,” he said. “We’ll build it as we get more events.”
The site will feature donors, memorabilia and souvenirs, historic trivia, a blog to record memories from current and former Culver City citizens and contact information, to submit an event for consideration, volunteer to help and a PayPal link to donate. 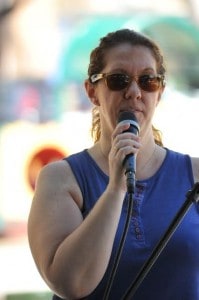 Historical Society President Michelle Bernardin welcomed the crowd with a few remarks, and encouraged everyone to look froward to the coming year. The Culver City Historical Society is one of the primary organizations supporting the .entennial celebration.

Opening Ceremonies will begin with a parade, Clarke said. He sent surveys to 320 non profit groups and businesses asking them if they will participate and how many people will be involved. From the 34 replies so far, 47 % will participate and 60% involve 10 or more people. “The parade will give us a built in crowd for the opening ceremonies, which will be by the Culver Hotel on the city’s original founding site,” he said.
Then downtown will become a huge block party to celebrate the 99th anniversary of Culver City’s incorporation on September 20, 2017 while a gala at the Double Tree Hotel on October 1 will provide dining, dancing and more opportunities to donate to the year of celebration.
Sunday was for boosters, officials, elected representatives, history buffs, businessfolk and tri-tip fans to raise money, savor Santa Maria’s BBQ, enjoy the ballads of Steve Lage, network and be seen supporting the Centennial celebrations effort. Then go home, roll up their sleeves and work to make it happen.

Once plans for the Centennial Year opening are set, the CCCCC will focus on the extravaganza that will culminate with a spectacular finale in 2017 to mark the 100th anniversary of incorporation.