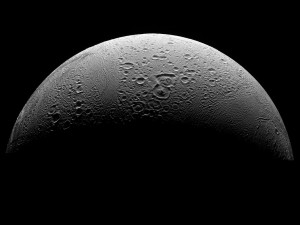 Every square inch of Saturn’s small moon Enceladus overlies a potentially habitable ocean. Observations of Enceladus’ slight wobble as it orbits Saturn can only be explained if the outer crust floats freely from the inner core, according to scientists studying images taken by NASA’s Cassini spacecraft. This means there is a globe-spanning ocean beneath Enceladus’ icy surface.

Enceladus has been a prime location for studying the potential for life in the solar system for the past decade, since Cassini found in 2006 a fine spray of water vapor, icy particles, and simple organic molecules erupting from fractures near Enceladus’ south pole. Measurements of the saltiness of geyser particles in 2009 proved that they must emanate from a liquid reservoir, and a 2014 analysis of Enceladus’ gravitational pull on the Cassini spacecraft demonstrated that the liquid reservoir is at least a regional sea underlying the entire south pole region. The new results—derived using an independent line of evidence based on Cassini’s images—prove that that regional sea is a widening of a global ocean. This discovery is published online in the journal Icarus.

“This exciting discovery expands the region of habitability for Enceladus from just a regional sea under the south pole to all of Enceladus,” said Matthew Tiscareno, a Cassini participating scientist at the SETI Institute, Mountain View, California, and a coauthor of the paper. “The global nature of the ocean likely tells us that it has been there for a long time, and is being maintained by robust global effects, which is also encouraging from the standpoint of habitability,” he said.

The discovery was made through a combination of imaging, dynamical modeling, and statistical analysis. “This was a hard problem that required years of observations, and calculations involving a diverse collection of disciplines, but we are confident we finally got it right,” said Peter Thomas, a Cassini imaging team member at Cornell University, Ithaca, New York, and lead author of the paper.

Enceladus has a tiny, but measurable wobble as it orbits Saturn. The icy moon is not perfectly spherical, and because it goes slightly faster and slower during different parts of its orbit, Saturn pulls and pushes the small moon back and forth as it rotates.

Tiscareno developed a series of dynamical models of this wobble, technically called a libration, 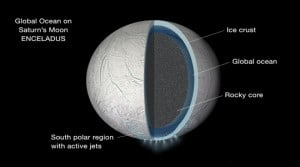 and Thomas’s group then tested each model against hundreds of Cassini images, taken of Enceladus’ surface at different times and from different angles, to find the best fit to the observations with extreme precision. The team plugged their best-fit value for the wobble into different models for how Enceladus might be arranged on the inside, including ones where the moon was frozen from surface to core.

“If the surface and core were rigidly connected, the core would provide so much dead weight that the wobble would be far smaller than we observe it to be,” said Tiscareno, “This proves that there must be a global layer of liquid separating the surface from the core,” he said.

The geysers deliver samples from this ocean to the surface regularly, which makes Enceladus a prime candidate in the search for life beyond Earth. Although a handful of worlds are now thought to have subsurface oceans, Enceladus joins only Jupiter’s moon Europa (which was recently selected as the destination of NASA’s next flagship mission) in having an extraterrestrial ocean that is known to communicate with its surface.