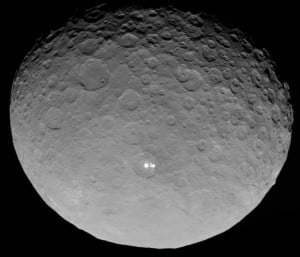 Striking 3-D detail highlights a towering mountain, the brightest spots and other features on dwarf planet Ceres in a new video from NASA’s Dawn mission. The video is available at:
www.jpl.nasa.gov/video/details.php?id=1392

A prominent mountain with bright streaks on its steep slopes is especially fascinating to scientists. The peak’s shape has been likened to a cone or a pyramid. It appears to be about 4 miles high, with respect to the surface around it, according to the latest estimates. This means the mountain has about the same elevation as Mount McKinley in Denali National Park, Alaska, the highest point in North America.

“This mountain is among the tallest features we’ve seen on Ceres to date,” said Dawn science team member Paul Schenk, a geologist at the Lunar and Planetary Institute, Houston. “It’s unusual that it’s not associated with a crater. Why is it sitting in the middle of nowhere? We don’t know yet, but we may find out with closer observations.”

Also puzzling is the famous Occator (oh-KAH-tor) crater, home to Ceres’ brightest spots. A new animation simulates the experience of a close flyover of this area. The crater takes its name from the Roman agriculture deity of harrowing, a method of pulverizing and smoothing soil.

In examining the way Occator’s bright spots reflect light at different wavelengths, the Dawn science team has not found evidence that is consistent with ice. The spots’ albedo—a measure of the amount of light reflected—is also lower than predictions for concentrations of ice at the surface.

“The science team is continuing to evaluate the data and discuss theories about these bright spots at Occator,” said Chris Russell, Dawn’s principal investigator at the University of California, Los Angeles. “We are now comparing the spots with the reflective properties of salt, but we are still puzzled by their source. We look forward to new, higher-resolution data from the mission’s next orbital phase.”

Ceres, with a diameter of 584 miles, is the largest object in the main asteroid belt between Mars and Jupiter.

At its current orbital altitude of 915 miles, Dawn takes 11 days to capture and return images of Ceres’ whole surface. Each 11-day cycle consists of 14 orbits. Over the next two months, the spacecraft will map the entirety of Ceres six times.

The spacecraft is using its framing camera to extensively map the surface, enabling 3-D modeling. Every image from this orbit has a resolution of 450 feet per pixel, and covers less than 1 percent of the surface of Ceres.

At the same time, Dawn’s visible and infrared mapping spectrometer is collecting data that will give scientists a better understanding of the minerals found on Ceres’ surface.

Engineers and scientists will also refine their measurements of Ceres’ gravity field, which will help mission planners in designing Dawn’s next orbit as well as the journey to get there. In late October, Dawn will begin spiraling toward this final orbit, which will be at an altitude of 230 miles.

Dawn is the first mission to visit a dwarf planet, and the first to orbit two distinct solar system targets. It orbited protoplanet Vesta for 14 months in 2011 and 2012, and arrived at Ceres on March 6, 2015.