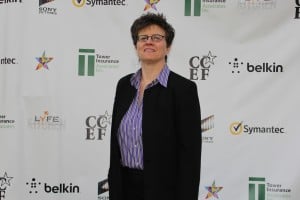 Scott McVarish, co-founder of the United Parents of Culver City and school board candidate, interviews CCUSD School Board Member Kathy Paspalis (pictured left at the CCEF’s 2015 Tribute to the Stars) on her thoughts on CCUSD school board relations, language immersion at the secondary schools, our Culver City Middle School and her top three priorities going forward. Video at: www.facebook.com/forgreatschools

Scott: Kathy Paspalis has been on our school board for 5 ½ years. She has two kids who are coming into their junior year at the high school. They were at the Culver City middle school and at El Marino previous to that.
SCHOOL BOARD RELATIONS
Scott: Things seem to be going really well in the district and on the board. That hasn’t always been the case but I feel the board is really working well together right now. What’s going right with the board right now?
Kathy: There aren’t a lot of personalities who are more concerned with their next office, or with union politics, or other types of politics. We’ve got five people who are solidly focused on the kids and I think that that’s an important difference. We all are working together well. We worked together to get the bond passed and now we’re working together to make sure that the priorities that were set in the needs assessment and master facilities plan can be achieved.
Scott: I went to the July 2015 Bond Facilities meeting but didn’t hear much about the priorities, How would you like to see the bond money spent and what are your top priorities? Because, obviously, not everything can be fixed.
Kathy: Yes, that’s correct. The master facilities plan indicated we have $165 million in needs. The bond was for $106 million. We may be able to leverage Prop 39 money among other sources, but generally speaking, we know that the $165 million in needs will grow. We’re going to have to make some decisions about where exactly will or won’t get done.
My priority is to start with health and safety. That ensures that learning can happen. Since I started on the board I’ve been looking at the big things that need to be fixed; the albatross formerly known as the Natatorium; the Frost auditorium really needs an upgrade as did the athletic facilities. We’ve already started a lot of that. We added solar which has been a great savings on our electricity bill. Beyond that basics like the bathrooms really need to get fixed, especially at the middle school/high school complex. There’s no reason why a kid should have to wait until they go home to do their business and yet they do. If you’re a councilmember, you always hear about the potholes and the sidewalk cracks. The bathrooms are the school board equivalent to that.
Scott: And the drinking fountains.