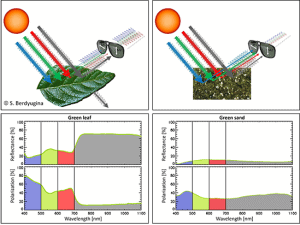 A team led by scientists from the University of Hawaii has developed a new approach to searching for life on other planets.

The team has measured various biological photosynthetic pigments in the laboratory. They absorb almost all solar light of specific colors in the visible and convert it into chemical bonds to store energy. For example, chlorophyll pigments absorb blue to red light and reflect a small part of green in the visible, as seen in green plants.

All infrared light is reflected, and this is employed in agriculture to monitor water content in crops. Such biopigments are contained in plants, algae, bacteria, and even in human skin (carotenoids) and eyes (rhodopsin), creating the colored beauty of our world. They can also help find life on the surfaces of other planets.

The scientists have found that the part of visible light reflected by various plants with vibrant colors oscillates in certain directions, while incident light oscillates in all directions. Thanks to this peculiarity, this reflected light can be detected remotely by using polarizing filters (similar to Polaroid sunglasses or 3D movie goggles) when viewed at specific angles, even if the star is millions of times brighter than the planet. The team found that each biopigment has its own colored footprint in such polarized light.

This technique could be instrumental in searching for life in the planetary system nearest to the Sun, Alpha Centauri, with existing telescopes. There are three stars in this system. While scientists are interested in finding life around all these stars, Alpha Centauri B, only 4.37 light-years from Earth, seems optimal for life searches with current telescopes.

In 2014, a small planet was discovered around Alpha Centauri B. Unfortunately, this exoplanet is ten times closer to the star than Mercury is to the Sun, so its surface is melting under the stellar heat, and it probably has no atmosphere. At a distance where planets like Earth with liquid water on their surface could exist (the “habitable zone”), no planets have been found as yet, but scientists are continuing to search for one. If such a planet is found, or even before that, it is possible to search for photosynthetic biosignatures in the Alpha Centauri B spectrum. Using the proposed polarization technique, this task becomes even more feasible. 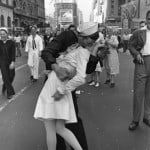 ASTRONOMERS SOLVE VJ DAY PICTURE MYSTERY. Friday, August 14th, is the 70th anniversary of VJ Day, which marked the end of World War II. That afternoon, as news spread and crowds filled the streets, LIFE magazine photographer Alfred Eisenstaedt snapped one of the iconic photographs of the 20th century: The Kiss, an image of a sailor in New York’s Times Square grabbing and kissing a woman in a white.

In the August issue of Sky & Telescope magazine, astronomy-history sleuth Don Olson of Texas State University and colleagues have definitively solved a key mystery surrounding the photo: when was it taken? Their astronomical analysis of a shadow cast by the Sun settles it: the time was 5:51 p.m., ruling out a set of longstanding claims about who the sailor and the woman might actually be.

Sky & Telescope has made public a PDF of its article—a successful mystery tale full of timely history. It’s at: http://skypub.com/VJDay