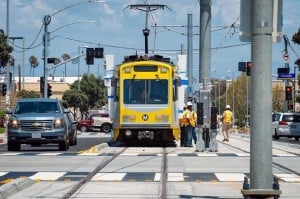 Train testing has been officially underway since July 16 on the Expo Line extension, sending trains casually traveling through the Westside for the first time in decades, but yesterday a really beautiful thing happened: a train glided through Santa Monica for the first time since 1953. The dream of taking a train to the beach (or really, really close—four blocks away) is now almost here and it’s pretty damn exciting.

We’ve kept tabs on the trains as they make their west way along the tracks for tests and trials leading up to the opening of the extension from Expo’s current terminus in Culver City to its new endpoint in downtown Santa Monica—the trains have traveled through West LA and pulled into the Palms station—but now, thanks to photos from The Source (and various others), we’re all witnessing the first train to chug around Santa Monica since the death of the streetcars. Have a hankie ready because it is beautiful. The extension is expected to open early next year.