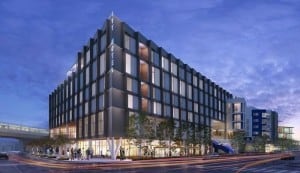 With swift work on the progress of the Expo Line extension to Santa Monica comes a big reveal for the giant new mixed-use project set to rise on the parking lot next to the parking lot at the line’s current terminus in Culver City (on National between Venice and Washington). Citing a website for the development, Urbanize LA says we can expect 500,000 square feet of “creative office space, luxury residences, boutique hotel and an open park” on the 5.2-acre site.

The buildings that appear in renderings on the site from real estate firm Lowe Enterprises all look to be very glassy and about five stories tall. Throughout the complex wind pedestrian paseos and green spaces (including that park). The site plan on the website shows the hotel along Washington Boulevard and the office space along Venice, with the residential between them, in the middle of the space. The new development will also include around 1,600 parking space, 300 of which will be saved for Expo Line riders. ULA says that Culver City-based architects Cuningham Group have been “linked” to the project, though no branding appears on the renderings. *Update: a rep for Cuningham confirms that they are designing the project and says that these renderings aren’t the final versions.

Kitty-corner to this development along Washington, the Access Culver City apartments are rising and, according to their site, will have a leasing gallery up sometime this summer. On the opposite side of the tracks, a fancy outdoor mall is in the works that will bring in high-end retail where there was once just a dumpy car dealership and some factories. That’s gearing up for an opening this fall.